It’s been an incredible ride as a coach, watching the players on our 14u team grow and achieve. I’ve coached some of these boys since they were eight, nine, and 10 years old, and it’s a bit emotional seeing them “graduate” to high school.

I’m excited to start over with this new group. We already have a core group of kids, and we’ll be finalizing our roster over the coming weeks.

As I continue to recruit and hold tryouts, I realize parents of prospective Spiders have questions. I hope to answer those questions here.

1. What Level Will We Play?

This time of year, it seems like every team plays AAA/Majors. When coaches recruit, they want you to believe they are a Majors team. The reality is that very few actually are.

The starting point for this team is my son, JJ. He’s been waiting for the opportunity to be a Spider for a long time! As a coach and a dad, my goal is for him to be the average player on the team. I want him to be challenged, but I don’t want to deal with the issues associated with the coach’s kid being one of the weaker kids on the team.

For reference, JJ has played for two of the best teams in the state during the past three seasons. So we’re looking at a simliar level.

Will we be a majors team? Will we be high AAA? That all depends upon how we fill out the rest of our roster. If your kid is a high majors player, that takes us a step closer to being a majors team.

Ultimately, I’m not a fan of labels. Having talent is the first step. But after that, we need to perform. I won’t enter us into majors tournaments just to say we did. We’ll do it because we can compete and win.

Yes, I’m a dad coach. I understand the potential stigma associated with dad coaches. Many parents complain about Daddy Ball. I’ve certainly seen Daddy Ball in action. But I’ve also seen the complete opposite, which is just as unacceptable — treating your own son worse than anyone else.

When on the playing field or practice field, I’m “Coach,” not “Dad.” And my goal is that when you watch a practice or game, you have no idea who my son is.

He may not be playing the glory positions or hitting third. And if he is, it’s only because he earned it. And I won’t be treating him more harshly than anyone else.

I do my best to treat everyone fairly.

3. What Positions Are We Looking For?

If there’s one thing I’ve learned over the years, it’s that you shouldn’t focus too much on filling specific positions. We want athletes who are versatile and can play multiple positions.

Even if you’ve been a shortstop in the past, you may not be a shortstop on this team. The truth is that we’ll likely end with more than half of our team who normally played shortstop.

If you only play catcher or first base, that can become a problem. What if we have a player who is better there? What if you can’t then find a spot on the field?

By focusing on athletes who can play everywhere, we can easily fill holes. You will always have a place on the field.

Sure, we want pitching. Everyone wants that ace. But I also want our entire team to pitch. And if we don’t have a defense, that ace pitching will go to waste.

4. How Many Tournaments Will We Play?

At the moment, we’re looking to play in about 12 tournaments. Weather is an issue in Colorado, so we’ll likely sign up for more than that. But when the season is done, we’ll have played in about a dozen.

How many games that results in, of course, will depend upon how we do. The 14u Spiders team this year will end up playing between 75 and 80 games. But that’s only because we consistently play until the championship game. That could easily be closer to 60 with less success.

We’ll play in a combination of Triple Crown, USSSA, and CABA (potentially PBR if other teams sign up).

5. How Much Will We Travel?

I plan on signing up for one tournament in Arizona in March and another in Steamboat Springs in June. The main reason is that these are fun experiences for the kids.

I don’t travel for the sake of traveling. It’s expensive and can be stressful when traveling often. We’ll only travel more than these two times if our roster is good enough for it — if it seems we need to travel to be challenged.

I’ve learned that in Colorado, you need to play whenever the weather will allow for it. So while most teams don’t get started until March or even April, I’ll look to sign up for a tournament or two in February, assuming there are some (there were this season).

Practices begin in November (more on that in #10), but we’ll play our first tournament around President’s Day and we’ll finish up with state tournaments in mid-July.

That is the plan. I use league games as a way to get our kids additional reps outside during the week. I treat these games more like a glorified scrimmage, allowing those who may not pitch or play certain positions to get those opportunities.

I’ve also been known to flip the lineup from time to time in these games because I realize that if you have a set lineup for the entire season, some players automatically get more opportunities than others.

Ultimately, we’ll either play league or a league substitute. The other reason we play league is to get access to an outdoor field without having to squat one. If I can get an outdoor field and work with local coaches to schedule 8-10 mid-week games or scrimmages, we may do that instead.

Assuming we don’t have many conflicts (football can be a big one this time of the year), we may sign up for a tournament or two as well.

Yes. We practice through Bardo’s Diamond Sports in Parker, CO. It’s a terrific facility that includes an indoor infield, tunnels, and hitting pods. 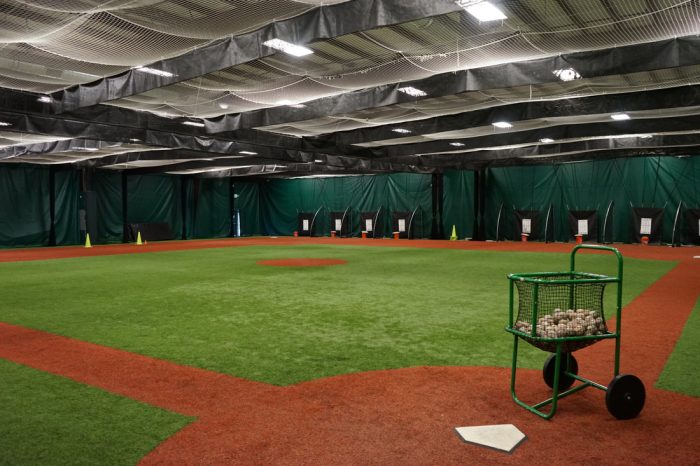 Bardo’s truly offers the best facility in the area, and their staff offer first-rate instruction. They have made a huge difference for the Spiders over the seasons.

I respect them so much that I also bring my boys in for weekly lessons to work on specific skills. I can’t say enough good things about Bardo’s.

We start with movements and cardio in the months of November and December out of Bardo’s. During this time, we aren’t picking up bats or throwing yet (unless you are doing that separately).

We will hold classroom-style chalk talk practices as well to discuss strategy, approach, responsibilities, and game situations. These will generally be about 45 minutes before or after a scheduled practice, and we’ll do them most often during the winter months.

We will also have an outdoor practice during the league season, typically from March into June. We won’t always use our outdoor practice time when also playing league games, but we’ll use it often.

From April through the final tournament in July, we’ll have our single weekly practice that is instructed by Bardo’s staff.

We will hustle. There is no excuse not to hustle. It takes no talent, and anyone can do it. Hustle will often be the difference between outs, hits, wins, and losses.

We will play smart defense, limiting miscues. One of the reasons we’re looking for good athletes is to make sure that we have outfielders who can change singles into outs and extra bases into singles. Our players will also be educated on backup and cutoff responsibilities, leading to crisp execution in the field.

We will be respectful of umpires, opponents, coaches, and teammates. As coaches, we will not tolerate disrespect of any of these groups.

Ultimately, we play team-first baseball, focusing on “we” over “me.” A selfish player has no place on our roster. We will support one another through the good and bad.

12. What is My Coaching Style and Philosophy?

I’ve admittedly evolved over the years. I’ve made it a goal to be a quieter, calmer, gentler coach as I age. During the games, I don’t want the focus on me. It’s on our players.

My job is to prepare our team for competition. We do this on the practice field. During games, I want to mostly step back and let the boys play. I will be there to guide them, correct them, and help them along. But for the most part, they will execute what they learn during the week.

As a coach, I need to be a model of behavior for our players. I will treat umpires and the opposition with respect. I will keep my cool. And I will behave in a way that will reflect positively on the team.

13. How Many Players Will We Have?

Over the years, I’ve learned the importance of reps. When these kids get to high school, those reps will be more difficult to come by. So for now, we need to focus on development.

To achieve development for the entire team, it helps to have a smaller roster. I’ve found that the ideal number of players is 11. This provides some depth as well as some protection in the event of absences.

I won’t add an eleventh player just to get to that number. If necessary, we may go with 10.

14. What About Playing Time?

Ideally, talent will be close to even from top to bottom. When that happens, it’s much easier to keep playing time within a narrow range. We’ve been largely successful at that with the 14u Spiders.

That said, playing time will not be even. We will try to win. Some players will be better than others at pitching and other positions. As a result, players will earn their roles.

I will use league games and pool play games to help even out playing time and opportunities, particularly in the first half of the season. I want all players to have multiple positions that they can play — ideally, everyone will play in the outfield.

We will move kids around quite a bit in the beginning to allow players to earn their spots. But in the end, opportunities, at bats, and playing time won’t be the same for everyone.

The cost of travel ball tends to fall within a very wide range. But if you go through a facility like Bardo’s, it’s going to cost more.

Access to Bardo’s costs close to $2,000 per season (per player) by itself. Add in tournaments, league, uniforms, and other expenses, and we’re talking about a final cost for the season of between $3,000 and $3,500. Expect that cost.

That said, don’t neglect the hidden costs of travel ball associated with travel and meals. As we all know, this stuff isn’t cheap!

Note that this also doesn’t include the fall training program that I would like for us to participate in. This will cost in the neighborhood of $800.

16. Will We Do Fundraisers?

I know. It’s expensive. So, will we hold fundraisers to cut into these costs?

I’ve always been open to fundraising. However, I will not lead that fundraising. Life is tough enough as the coach, and I like to focus my energy there!

However, if there’s a parent who wants to lead this (I think we may have that this year), we will absolutely hold fundraisers to help with expenses.

Do you have additional questions that weren’t answered here? Send me an email or drop me a message at my Facebook page!