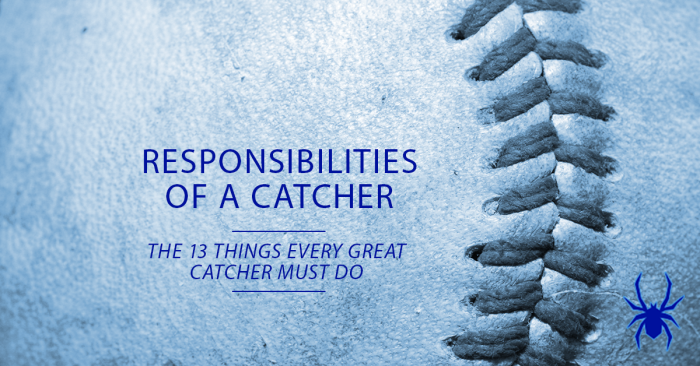 We recently talked about how a pitcher can find success at the youth level, even without a plus fastball or knee buckling curve. Now it’s time to talk about catching.

The funny thing is that the pitching article also relied heavily on the catcher. But just as is the case in real life, the pitcher gets the headline while the catcher does much of the work.

Actually, we don’t want the pitchers to know that. But the little secret among catchers is that you are actually the one who controls the game — you just don’t get the credit.

Of course, having the responsibilities of a catcher while getting little of the glory isn’t a particularly desirable task. But if you’re up to taking on the following 13 responsibilities, you have the potential to be a great catcher…

A catcher in youth baseball has 13 primary responsibilities that will help him be great... Click To Tweet

It’s not about you.

You touch the ball as much as everyone but the pitcher. But when you do your job properly, you’re barely noticed.

That’s okay. You don’t need the attention. Or at least, if you want to be a great catcher you had better not care about getting attention.

You’re not the pretty boy on the mound. You’re not glamorous. When the game is over, everyone talks about the pitcher.

But you don’t care.

As a selfless catcher, you have one primary responsibility: Make your pitcher look good.

The pitcher will get all of the credit. A catcher needs to accept it. Enjoy it. It’s his job to get that pitcher his glory.

If the catcher lines up down the middle, that pitcher will throw a meat ball. Don’t do that.

That’s okay. If a pitcher looks good when all is said and done, you did your job.

Pitchers are fragile. Or again, that’s the secret among catchers.

If he’s getting shaken up on the mound, call time to slow him down. Remind him how amazing he is. You need a confident pitcher or forget about getting the next batter.

Keep him loose. Keep him focused. Keep him feeling great about himself.

4. Let Nothing By You

You’re the only player on the field with gear on. You must use it. You have no business being afraid of the ball.

Dive at the ball. Throw your body at it. Do everything you can to stop it.

Let nothing by you.

There is little that is more frustrating to an opposing team than a catcher who forces them to go station to station rather than allowing the occasional easy jog to the next base.

While nothing should ever get by you, this is especially true with a runner on third. That is your runner. Even the wildest of wild pitches can’t find the backstop.

5. Have a High Pain Threshold

You may have gear, but that doesn’t mean this will be easy.

You’ll take foul balls off of your mask. Sometimes repeatedly.

Batters will hit you on the back swing. Or they’ll throw their bat at you on the way to first. Thanks, guys!

More than any other player, you’ll take wild pitches and foul balls off of the most delicate place on your body. And while the typical human will need to be escorted from the premises, all you’ll need is 30 seconds.

You’ll dive. You’ll leap. You’ll collide with runners. You’ll have more bumps and bruises at the end of the game than you’ll be able to count.

But this is in your job description. And you wear it like a badge of honor because no one else would be willing to take that type of abuse.

Umpires are human. You’d be surprised how that fact can impact the borderline calls.

Make that umpire your best friend. Ask him about his family. About his full-time job. About his playing days when he was a kid. Tell him he’s an awesome umpire. Be sincere.

When that umpire takes a foul ball, call time. Walk slowly to your pitcher for a meaningless chat. When you return, ask that umpire if he’s okay.

Protect that umpire. Make it your job. If a ball gets by you that hits the umpire, apologize and shake his hand.

Your pitcher is nervous. Your teammates in the field aren’t paying attention. It is your responsibility to know what’s going on.

Much of this is simple situational awareness, and you’re primarily responsible for most of it.

You better know the count because that will impact how you work a batter.

You better know where you are in the lineup.

You better know how many outs there are.

You better know how many runners are on base, where and what types of runners they are.

You better know the score.

A catcher who isn’t constantly aware of these situations can’t be a good catcher. Handling the physical side of the game alone simply isn’t enough.

As we mentioned earlier, the catcher is incredibly important when it comes to location. If you line up down the middle, that’s precisely where the pitcher will throw it. You can’t let that happen.

Work the batter in on his hands. Work him low and away. Have the pitcher change speeds.

See where the batter is in the box. If he’s ahead or behind the pitch. Keep him guessing. Get into his head.

Work that batter so hard and never let him get comfortable.

You don’t have the lineup card. You aren’t the scorekeeper. But you need to have this stuff burned into your brain.

Where are we in the lineup? Is it the third batter? Ninth?

What did this batter do last time? Did he strike out? Did he bunt? Did he hit a bomb to center? Did he pull a shot down the line? Was he late the other way?

You need to know these things, not only for your pitcher but for your teammates in the field.

Every good team needs a leader. And one of the leaders — if not the leader — needs to be the catcher.

Be a positive force. Keep everyone up when things are looking down.

Be vocal. A catcher needs to be heard.

Lead by example. Always work hard. Set the tone for your teammates.

You’re the field general. Not the shortstop. Not the centerfielder. You can let those guys think it’s them, but it’s actually you.

You know the lineup. You know what the other team has done and what they are capable of. Make sure your teammates know, too.

If you see your right fielder is too deep for the current batter, bring him in.

If you know the current batter is prone to pull the ball, move your third baseman closer to the line.

After the second out is recorded and prior to the first pitch to the next batter, stand in front of the plate, take off your mask and yell for all of your teammates to hear: “Two outs!”

You know the situation. You know where the next play needs to be. Remind your teammates!

A bad catcher can hurt his team in multiple ways. He allows runners a free pass when the ball gets by. He helps the batter with poor pitch selection.

But he can also negatively impact his team by making poor — and unnecessary — throws.

That runner is going to make it to second easily? Don’t throw it. If you do, it sure better be a good throw, or you’ll let that runner move on to third.

There’s a bunt in front of the plate with a runner going to third. Do you take the out or attempt to throw out the runner at third? If you make the throw to third, it had better be a good one.

Being selectively aggressive is a common theme since we’ve mentioned the same for a productive hitting approach.

Above, you’d think that a good catcher would rarely throw the ball. That’s not necessarily the case. They just need to be smart about it.

If a good baserunner on first is dancing too much, make a surprise throw over and nail that sucker. Make him think twice about taking that big lead.

If there’s a lazy runner on third with the best hitter at the plate and one out, throw a bullet to third. Catch him napping.

Make good throws. Make smart throws. But be aggressive and make those runners take one less step off of the base. Make them one step slower to the next base.

As a selectively aggressive catcher, you will be noticed. And your team will gain outs because of it.

The life of a catcher isn’t glamorous. It’s dirty. It’s painful. But for a team to be successful, it’s necessary.

What other responsibilities of a catcher am I missing? Let me know in the comments below!