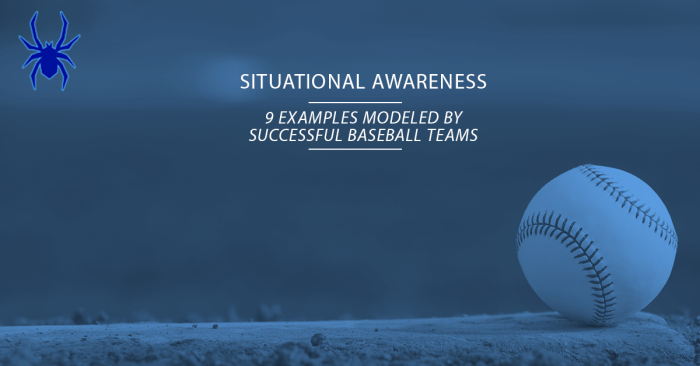 Yesterday, we covered the first pillar, Hustle. We talked about how the best teams not only hustle during obvious times but when most other teams don’t.

Hustle is great, but it must be combined with awareness. Awareness is a thorough understanding of the situation and a player’s roles or responsibilities in that situation.

In the future, I plan to write a post about self-awareness, or an understanding of one’s own strengths and weaknesses and how he can best contribute to the team. But awareness in this case today will focus on situational awareness.

Since we’re talking about youth baseball, it’s expected that awareness for kids can be a challenge. Awareness requires critical thinking, focus, recall and problem solving skills. But mostly, it requires good coaching to make sure that being aware is part of a player’s natural process.

Understand that awareness isn’t simply constantly reminding a player of the situation and their responsibility. It would be impossible to yell out every scenario for every player given the current situation.

I also find that these reminders can cause problems. Not only can players lean on them — requiring reminders to perform the desired action — but too many directions can become white noise.

The most successful baseball players and teams have a situational awareness that prepares them for action. They are confident in their roles and responsibilities as hitters, baserunners or fielders based on the situation.

It’s important that players make awareness of the following questions part of their routine. Note that some of these questions apply to hitting, some fielding, some baserunning and some to multiple situations.

Let’s take a look at the things that players and coaches alike should be thinking about to retain a high level of situational awareness.

The most successful baseball players have a situational awareness that prepares them for action... Click To Tweet

I will always be AWARE of…

1. The number of OUTS

Probably the main source of bonehead mistakes made on a baseball field is not knowing how many outs there are. Most frequently, this impacts baserunners and fielders.

My oldest son is a catcher and once made a mistake he will never make again. With a runner on third and one out, the batter at the plate struck out. He, thinking that was the final out, rolled the ball back to the mound. His pitcher assumed three outs as well. The runner scored.

These are good lessons! I can guarantee that this mistake reminds him to be 100% certain of the number of outs now!

The Hitter: With fewer than two outs, your goal may be to move the runner via a ground ball or fly ball to the right side.

The Runner: With two outs and the ball is put in play, you’d better be running! With under two outs and a ball is hit in the air, you should either freeze, go half way or tag (depending on the situation).

The Fielder: With two outs, your play is to get the final out. With fewer than two outs, you are looking to potentially turn a double play or throw out a tagging runner.

2. The RUNNERS ON BASE

The Hitter: Runners are on first and third or you have a top base stealer on first base. Consider taking a pitch to allow that runner to advance. At minimum, if given the green light to swing, only swing at a pitch you’re ready to drive.

The Fielder: You’re the center fielder, a runner is on first and a single is hit to you. Your throw is to third base. Or you’re the shortstop and a grounder is hit up the middle. Your first play is a force at second.

This is such a simple thing, yet youth players often approach each pitch as if it’s an 0-0 count. The truth is that the hitter, runners and fielders all need to know the count. It changes your approach. If you don’t know it, ask!

The Hitter: A baseball player who has situational awareness approaches each pitch differently based on the count. When ahead in the count, he makes sure to swing only at a pitch he can handle. With two strikes, he protects the plate and expands his zone. With a 3-0 count, he rarely swings, though that will depend on the player and situation.

The Runner: Know that with two strikes, the pitcher may be more likely to throw an offspeed pitch. While you may not have a steal sign, be prepared for the ball to hit the dirt.

The Fielder: This applies mainly to the catcher (who typically controls pitch calls and location) and pitcher. When ahead in an 0-2 count, there’s no need to grove a fastball down the middle to the best hitter. When a dropped third strike is in play, the catcher needs to be prepared to stop everything, tag and throw (if necessary).

The score is going to impact how each team approaches the game. If it’s a close game, every run matters. As a result, the offense may play for a single run while the defense may try more aggressively to get the out at the plate.

The Hitter: Your team is down by three runs in the final inning and you are leading off. You should not be up there trying to hit a home run. Your team needs baserunners. Or the score is tied with a runner on third and one out. You need contact, and preferably on the ground.

The Runner: In a close game where putting runs on the board is difficult, you may need to be more aggressive. On the other hand, when down by three in the final inning and you’re the only runner on base, your run means very little. You want to score, but the main priority is not to get out.

The Fielder: It’s a tie game in the bottom of the final inning with a runner on third and one out. You cannot let that run score! Or… you’re up by two in that same situation. Get the out at first!

5. How the other PITCHER is doing

Undisciplined hitters often make the mistake of failing to spot trends with a pitcher. When the opposition’s pitcher is having trouble throwing strikes, don’t help him out!

The Hitter: The pitcher has just walked the last two batters on eight straight pitches. Be very selective until he proves he can throw strikes!

Or the pitcher consistently gets ahead in the count with first pitch fastballs, followed by curveballs in the dirt. Be aggressive on the first pitch!

The Runner: If the pitcher is struggling to throw strikes, be conservative on the bases. You may move up via the walk. Or you may get an extra base due to a wild pitch.

The Fielder: You’re the catcher, and your pitcher is mowing down the offense. The current batter swings late on the first two pitches. Come back with another fastball!

On the other hand, the current batter has driven the first two fastballs hard, pulling them foul. Come back with an offspeed pitch.

Far too often I see defenses play the opposition straight up at medium outfield depth, regardless of the batter or the situation. While this ultimately falls on coaches, the players should also have the awareness to adjust.

The Fielder: You’re a third baseman with runners at first and second in a close game, bottom of the order at the plate with no outs. Be prepared for the bunt!

Your ace pitcher is throwing gas, and the other team — loaded with right handed batters — struggles to catch up. Shade to the opposite field. This may also alter second base coverage responsibilities on stolen bases.

Additionally, understand what type of hitter is at the plate and what he’s done before. Should the outfield play deep for a power hitter? Should they play in for the bottom of the order?

7. Where I should BACK UP

While there are nine players in the field and the probability of a ball being hit to you on a given play is slim, every single player should be in motion. You have a responsibility, whether it’s covering a base or backing up a teammate.

A strategic baseball coach and player is constantly aware of the spot in the lineup. Who is hitting impacts the probability for runs. As a result, both hitters and pitchers may change their approach depending on who is coming up next.

The Hitter: As the last batter in the lineup, you know your best hitters follow you. Your job is to get on base. Force the pitcher to throw strikes.

If you are the final “strong” batter in the lineup with two outs and a runner in scoring position, expand the zone a bit to give your team a chance to score a run.

The Fielder: This again applies mainly to the pitcher and catcher. If it’s the bottom of the order, don’t mess around. Throw strikes and mainly fastballs.

If you are facing a batter who is difficult to get out with two outs and a runner on third, make him hit your pitch.

It’s elementary, but a lack of focus and awareness often leads to this big blunder…

The Runner: Never take your eye off of the player with the ball. Or if you lose track of who has the ball, do not leave your base!

These are my nine examples of ways youth baseball players can exhibit situational awareness. Anything you’d add?