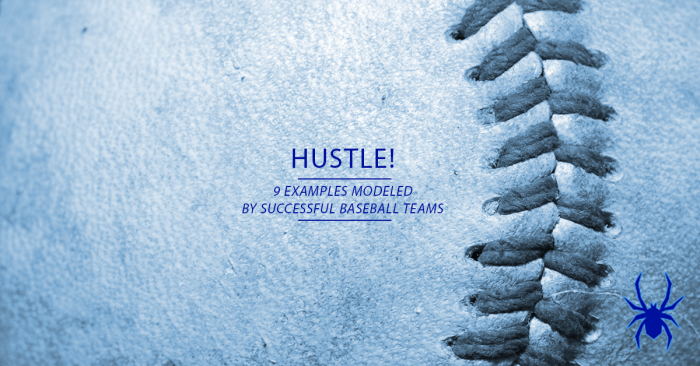 This past weekend, I witnessed the most impressive youth baseball team I’ve ever seen in person. They were impressive in every way. One of the key differences between them and everyone else was their hustle.

A team that always hustles exudes a special confidence and layer of polish. It is that consistent, disciplined hustle that often separates the very good players and teams from the great ones.

Great players and teams don’t only hustle at obvious times when it appears to be necessary, but at all times — including moments when you don’t expect it will be needed.

The thing is, though, that hustling isn’t reserved for the great teams. It doesn’t take talent to hustle — anyone can do it. Hustle can add incremental success, even for less talented teams.

Make hustle a part of your team’s culture. Preach an environment where hustling is rewarded, and highlight those cases where hustling leads to unexpected success.

Hustle and the lack of hustle are also contagious. When kids set the example — both positively and negatively — others are bound to follow. The funny thing is that hustling is actually far more fun than not hustling, but so few players and teams do it consistently!

In this post, we’re going to break down what it means to hustle, focusing on specific examples. As you read through these examples, you may think to yourself, “Wow, this team is going to be running a LOT!”

Absolutely. It’s one more reason why conditioning — one of the most overlooked aspects of training — is necessary.

Successful baseball players and teams don't only hustle at obvious times, but at ALL times... Click To Tweet

I will HUSTLE when I…

1. Run ON AND OFF THE FIELD

A sign of a disciplined, successful baseball team is one that hustles on and off of the field. This is where the tone for hustle is set.

We’ve seen the alternative. Some players sprint. Some jog. Some walk. Some alternate between jogging and walking. It looks disorganized and sloppy.

As coaches, we can’t expect kids to sprint on and off the field without practicing it. Establish these expectations in practice, and actually walk (sprint) through what will happen following the mid-inning team huddle or final out in the field.

There are obvious times when most hitters will hustle. They hit a ball into the gap and can smell extra bases. As a result, they sprint out of the box.

But what separates the great players and teams from the very good ones is hustling on balls in play when others do not.

A batter hits a smash, one-hopper back to the pitcher. An easy grounder to the second baseman. A slow roller to first base. The typical player drops his head and jogs to first, expecting the out.

A batter hits a pop-up on the infield. Most will watch that popup and slowly jog to first. Some will stop entirely.

A batter hits a clean single to right field. You can expect most players to assume one base and move at a moderate pace to first.

Fielders aren’t perfect, however, particularly at the youth level. And by failing to hustle in these situations, we assume perfection. That’s a huge mistake as players are leaving bases on the table. And those extra — or lost — bases result in runs and wins.

An easy ground ball will not always result in an out. The fielder may fumble the ball initially. It may go through his legs. He may make an imperfect throw.

By hustling, you are putting the pressure on the fielder. They can only get you out by making a clean play.

By not hustling, we are increasing the margin for error. By not hustling, the fielder can boot the ball, recover, make an imperfect throw that takes the first baseman off of the bag and still get you out.

A batter who always hustles out of the box will reach base safely — via clean hits and errors — more frequently than those who don’t hustle consistently.

When we talk about hustling on balls hit in play, we also include a ball that may or may not be foul.

The ball is hit softly off of or around the plate. A blooper is hit down the line. A spinning slow roller is hit on the foul side of first. A ball is hit up in the air, but the batter doesn’t know where it is.

In all of these cases, the batter needs to sprint until he hears the umpire call it foul.

Far too often I’ve seen a batter stand in the box — or barely get out of the box — while he watches what he assumes to be a foul ball. Suddenly it’s fair, and they have no chance to make it to first.

If it’s foul, you’ll get another chance. But if it’s not, your at bat is done because you failed to hustle.

We will swing at strikes. If the opposition doesn’t throw us strikes, we will take walks.

But we will never walk to first.

A walk is not a dead ball, yet so many teams treat it as such. The ball is live and a hustling player can take advantage of teams that aren’t paying attention.

A batter who sprints to first base on a walk gives the first base coach options. Maybe ball four was a wild pitch that the catcher is taking a while to recover. Maybe the runner on second stole third on the pitch and focus is on that runner.

A walked batter who hustles to first can be sent to second in some rare situations. But by not hustling, this will never be an option.

This is more mental than anything.

Unlike the walk, a hit by pitch is a dead ball play. The batter can’t take an additional base by hustling to first.

However, I like to see a player — who isn’t seriously injured, of course — sprinting to first base in this situation. It can provide a mental edge. It tells the other team that you can’t hurt me, you can’t shake me and I’m focused on moving to the next base.

It’s a typical scene: Strike three call, and the batter mopes back to the dugout, head down.

This drives me crazy. It should drive any coach crazy.

First, we should always be doing everything we can to get on base. Don’t assume the catcher caught that strike cleanly. If drop third strike rules are in play, immediately sprint to first.

Even if the catcher did catch it cleanly — or if first base is occupied with fewer than two outs — a sprinting batter will often convince the catcher he needs to throw to first. This can cause confusion for the defense — and mistakes.

Dropped third strike aside, let’s assume that the batter can’t move to first. The strike was caught cleanly and he can’t move up.

Keep your head up. Run back to the dugout.

Many of the cases being outlined here will result in reaching safely more often by hustling. This, however, is more about attitude.

A batter who slowly mopes back to the dugout draws attention to himself. He looks selfish. He slows the game down.

A batter who sprints to the dugout after a strikeout sends a positive message. He’s already moved on. His teammates shouldn’t be concerned either.

Of course, hustle doesn’t only apply to hitters and baserunners. The fielders have a responsibility to hustle as well.

If a slow roller is hit to an infielder, you can’t sit back and wait for it. Assume a hustling batter. You need to charge that ball quickly!

On a clean single, get to the ball quickly with an immediate throw back to the infield. Don’t allow hustling baserunners to take extra bases on you.

Remember that when you hustle in the outfield, you can also take advantage of runners who fail to hustle. A clean single to the outfield can result in a batter thrown out at first or a runner forced out at another base.

8. BACK UP my teammates

As a fielder, you always have a responsibility, whether the ball is hit to you or not. Your hustle can help cover for the mistakes of teammates.

You’re a center fielder, but a ground ball was hit to the right fielder. You need to hustle — covering a lot of ground — to get behind that right fielder. If the ball gets by him, you’ll be there to prevent runners from taking another base.

You’re a left fielder, and the runner on second is stealing third. It is your responsibility to hustle in to back up the throw to third. By doing so, you can prevent that runner from scoring.

Too often I see an outfielder assume his teammate is going to recover the ball cleanly. Too often that ball gets by that teammate with no one there to pick it up.

Backup responsibilities apply to every game situation. Hustling to cover those backups will limit bases advanced and runs, as well as defensive errors scored.

A large part of hustling on the bases is connected to awareness and quick reactions. It’s about anticipation and being ready to move quickly to the next base.

A hustling runner from first to second on a grounder to the shortstop may beat the throw on a force out. Or he may force a bad throw.

A hustling runner — who doesn’t assume an out or stop at the next base — is more likely to not only reach the next base safely but advance an extra base.

Smart, aggressive baserunning is one of the easiest ways to put pressure on the other team. It will result in more mistakes by the opposition, more extra bases, more runs and more wins.

What has your experience been with teams that do and don’t hustle? Anything else you’d add to this list?