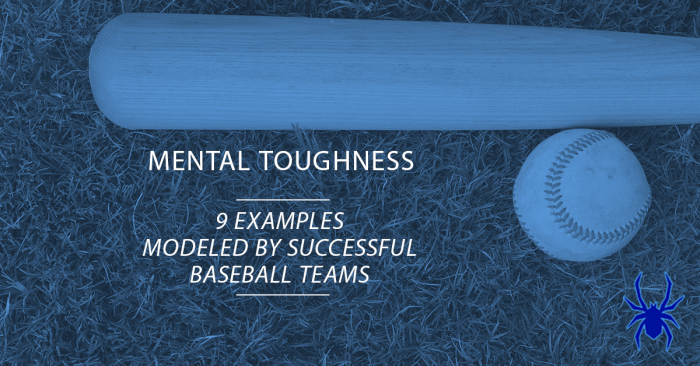 We’ve already covered Hustle and Awareness. A team that always hustles when others wouldn’t and is constantly aware of the situation and responsibilities is likely to succeed.

Understand that I’m not talking about the old school “tough guy” attitude. This isn’t about playing through serious injuries or putting the kids at risk.

Mental toughness is the discipline to remain focused when others would not.

These are kids. They will be emotional. We also need to be realistic about our expectations.

But players who channel their emotion constructively and maintain focus are those most likely to find success on the diamond.

Let’s take a closer look at ways that mental toughness separates the great baseball players and teams from everyone else.

Mentally tough baseball players display a discipline to remain focused when others would not... Click To Tweet

I will be MENTALLY TOUGH when…

Slides into bases. Batters hit by pitches. Dives for baseballs. Collisions with other players.

These things serve as a mental challenge to the player. Will they allow the physical nature of the game to impact their approach?

It’s important for the player to recognize what is a simple bump, bruise or scrape. These things may be painful at the time, but they can serve as distractions — as something to be focused on instead of the game.

We’ll see this repeatedly at the youth level…

A player dives for a ball and misses it. He writhes in pain.

A player attempts to run out a grounder, is called out, stumbles over the bag and remains down in agony.

A player slides into second, is called out, and limps off of the field.

Don’t get me wrong, there are times when players are legitimately hurt. However, I’d counter that the vast majority of the “pain” here is actually in response to the failure.

There are players who are constantly “getting hurt” and those situations almost always coincide with a negative result. After a couple of minutes, they hop back up and are just fine.

This is a very difficult situation for a coach. You can’t ignore what may be a serious injury. But when a player constantly “cries wolf,” it’s difficult to know when it’s just another episode or if he’s seriously injured.

Note there is a clear distinction between “getting hurt” and an injury. You can play through minor aches and pains. Playing through injuries — particularly arm injuries — can lead to further complications.

A mentally tough baseball player recognizes that minor bumps, bruises and scrapes are part of the game. They wear it like a badge of honor. They don’t let it distract them.

Sometimes, everything seems to go right. All of a player’s hits are finding holes. The team has everything working and is on a winning streak.

While confidence is high, a successful stretch is also a time when mental toughness is challenged.

Will you lose focus? Will you get overconfident? Will you become complacent?

The truth is that “success” is often arbitrary. A single player could hit the ball identically in two stretches of 10 at bats and in one have eight hits while having zero in another. The same arbitrary nature of the game can lead to a stretch of wins or losses.

A mentally tough player will appreciate the success, but continue to focus on process. He will recognize areas of his game that need to be improved and continually work to get better.

There is a fine line between being “loose” and “overconfident” during a successful stretch. The key is to retain the same process and to recognize that there is always room for improvement.

What happens when a player suddenly can’t buy a hit? He’s striking out more often? Even when he hits the ball hard, it finds a glove?

Every player and team will deal with failure. Things won’t always go well. How will they handle adversity?

Make no mistake, dealing with failure is difficult. And those who aren’t mentally tough will crumble in these situations. They will fall apart and dwell on the negative. Things will only get worse.

A mentally tough player will remain positive. He will recognize whether his failure is due to things within his control or if he is following a productive process. He will make note of flaws and correct them.

A mentally tough team will see adversity as a challenge. They will work harder. They will remember the feeling of failure as something they don’t want to feel again.

Mental toughness while having a lead is the small scale equivalent of dealing with success.

How do your players behave when they have the lead? Are they confident? Do they remain focused on finishing what they started?

Or do they get over confident? Do they lose focus? Do they assume victory before the final out?

A team that lacks mental toughness will get complacent with a lead. They will assume victory and begin doing things that aren’t consistent with their process.

The key to a mentally tough team is that they will remain focused when they have a lead. They will continue applying the process that helped them get that lead in the first place, not taking anything for granted.

5. My team is BEHIND

What happens when your team is trailing? Do you drop your head and get discouraged? Do you put more pressure on yourself? Do players become negative and lose their competitive fire? Have they given up?

Or do they work harder?

A mentally tough team remains positive. They know that the other team may get complacent. They know that anything can happen in the course of a complete game, and that they need to chip away one run at a time.

A mentally tough team thrives on this adversity. They will outlast the opponent, and they understand they haven’t lost until the final out is recorded. They will wear the opponent down.

Nothing is more gratifying than a dramatic, come-from-behind win!

There are a million potential distractions during a baseball game…

Mom is screaming from the stands.

A fast runner is dancing around off of the base.

The other team is screaming nonsense while you are trying to pitch.

The fans are going crazy.

It’s raining. Or cold. Or windy. Or hot.

How do you deal with these distractions?

A mentally tough team will take them all as challenges. As more motivation to do well. As a challenge to remain focused.

As a coach, I try to use these things to inspire my players.

It’s cold and rainy? This is the only time I’ll acknowledge that. Yes, it’s cold. We won’t mention it again. But use this as a personal challenge. The team that wins will be the team that overcomes the conditions.

The other team is loud and exhibiting bad sportsmanship? Let that motivate you. Don’t stoop to their level. Don’t allow them to distract you. Don’t give them what they want. It will only become more gratifying to beat them.

Youth baseball games can become intense. They can put an extraordinary amount of pressure on a kid. How will they handle it?

The truth is that most won’t handle it well. They will either become more passive or more careless. Each case represents a lack of mental toughness.

It’s the bottom of the final inning. Tie game. Winning run on third.

In the field, do you want the ball? Are you going through in your mind what you will do with it if it comes to you? Or are you hoping it’s hit to someone else?

At the plate, are you remaining focused? Are you hoping to be walked? Are you scared? Are you too concerned about being the hero and swing at bad pitches?

A mentally tough player handles the spotlight well. They are as calm as they can be (it’s not easy!). They approach the important moment like they do any other moment. They continue to be aware of their responsibilities and are focused on executing a productive process.

Mental toughness is easy to spot at the plate, regardless of the situation.

Are you disciplined? Do you have a plan? Are you selectively aggressive?

A mentally tough batter understands the situation and is disciplined in his approach. He doesn’t try to do too much. He knows his role. He knows not only when to be selective and when to be aggressive, but how to execute.

The key for a mentally tough player is the execution. Any batter can be aware of the situation and understand what they are supposed to do. But can they actually execute it?

Similarly, a player can be situationally aware in the field, but those who are mentally tough will actually execute per their roles and responsibilities.

When the ball is hit in the air to you in the outfield, is your first step back or forward? Many players will get nervous and anxious and either freeze or immediately run in. A mentally tough player calmly first steps back.

Do you take a disciplined approach, knowing the impact of your actions and understanding risk and reward?

A mentally tough outfielder will see a dipping line drive as a poor risk, a bad time to dive. On the other hand, he’ll see a looper he can get to — with a backup behind him — as the perfect opportunity.

All fielders may be situationally aware — they may know what they are supposed to do and when. But the mentally tough players are those who are disciplined, take that knowledge and execute it at the appropriate times.

Any other examples of mental toughness that you can add?