At the youth level, the one defensive situation that may cause more confusion for kids is with runners on first and third base. Let’s take a closer look at the situation, why it causes problems and how you can approach it with your team.

The First and Third Playbook

You can view the entire First and Third Playbook within the embed below. You can also download the entire thing by clicking the Download link.

The opposing team is at the plate and they have runners at first and third base. This often puts the defensive team in a dilemma.

Far too often, the defense falls into chaos, leading to a runner on second and a run scored. We definitely want to avoid that.

But the response is often too conservative. Instead of trying to do too much, the defense does nothing.

The team in the field should be focused primarily on one runner. Depending on the situation (the score, number of outs, runners on the bases, batter at the plate), the defense should choose to focus primarily on the runner at first or the runner at third — not both.

There will be one exception that we’ll get to, but that’s a more advanced approach to defending this situation.

Don’t get me wrong, there are ways to address both runners. But in general, the players should be focused primarily on one.

The key to defending the first and third situation is deception. It should never be clear what you are trying to do. Once you make it obvious that you aren’t going to throw to second, it’s a free base for the opposition. When you make it clear you will throw through, it’s a free run.

This is important because the offense may not try to steal second unless they know it’s a free base. By keeping your intentions under wraps, you can force the offense to play it more conservatively.

One way to make sure that the offense doesn’t know what you’re doing is to have a base set-up that is used regardless of your play. Why is this necessary?

To counter this, we’re going to have defenders go to the same spot for nearly every play. The difference will only be in how they execute the play. 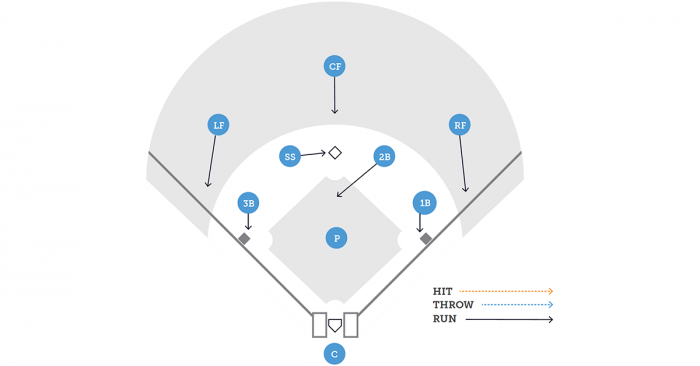 Above is my recommended base set-up. The second baseman always comes in between the mound and second base. He can cut the ball off, but he can also let the ball through. While I’ve used the shortstop for this responsibility before, the second baseman has a much better view of the field. He can see what the runner at third is doing and has momentum going towards that runner if a throw needs to be made.

The shortstop will always cover second. He also has a better view of what the runner coming into second is doing.

The outfielders will always back up (after the pitch reaches the plate) the base closest to them.

There is one exception to this base set-up, but we’ll get to that later.

Get the Runner at Second: Catcher to Shortstop 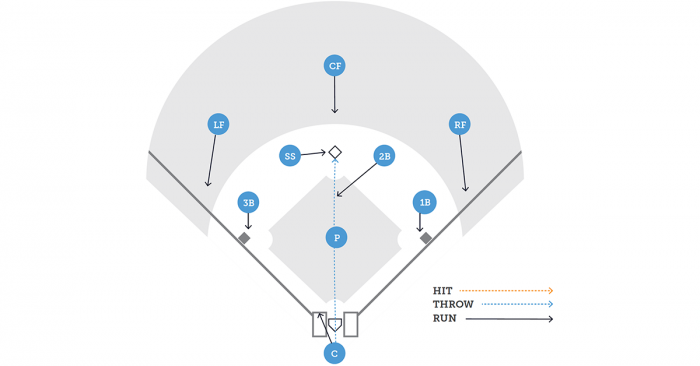 The Execution: Our only concern here is the runner stealing second. If the catcher has a play, he makes the throw through. Teams often assume you won’t attempt to get the runner at second, so this can work well as a surprise play, catching a stealing baserunner who doesn’t get a good jump.

Considerations: To make an out more likely, you may consider having the pitcher pick to first multiple times prior to pitching. You want to limit the runner’s jump because you want to get him out.

Pitcher Picks Off at Third Base to Draw Runner 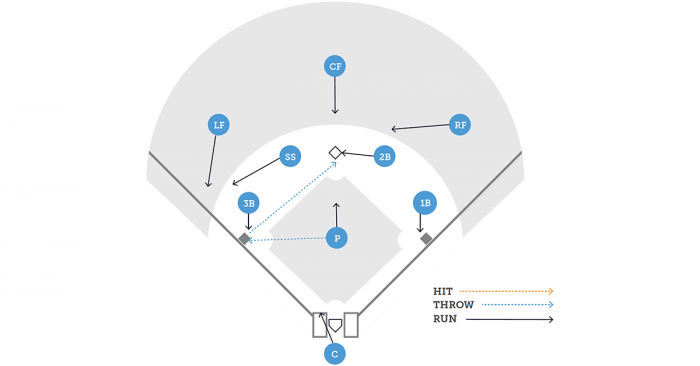 Responsibilities of the fielders are different here since the second baseman needs to cover second to receive the throw from the third baseman, and the shortstop needs to head towards third. But this reaction can be delayed once the pickoff throw is made.

This play works great for a couple of reasons. First, the runner at third retreats with the pickoff move, making it less likely they will head home with a throw to second. Additionally, the pickoff move shortens the throw that needs to be made to second base to get the stealing baserunner, making an out there more likely.

The key here is to sell it. A quick move to third will make it less likely that the runner at first takes off. And the third baseman then needs to be quick in making his throw to second.

Considerations: Feel free to try this multiple times in a row to try and bait the runner on first base. You can also run this play later in the game if you didn’t throw through to second when this situation came up earlier. The team may be more comfortable sending the runner from first. 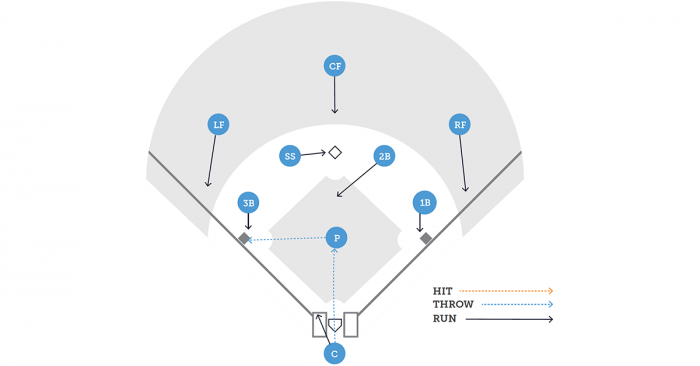 The Execution: The defense acts as though a throw is being made to second to get the runner stealing. The second baseman and shortstop both get into base set-up position. A quick, strong throw is made to the pitcher. If the runner at third ventures too far off the base, the pitcher makes a play on him.

Considerations: The goal here is to prevent the run from scoring. So it’s important that if the runner is caught too far off base that the pitcher first runs at the runner. One option for the baserunner is to intentionally go too far, then run home when a throw is made to third. The defense cannot allow that to be possible.

It’s important that the catcher makes a strong throw as if he is throwing to second. Deception is key.

Throw from Catcher to Third Base 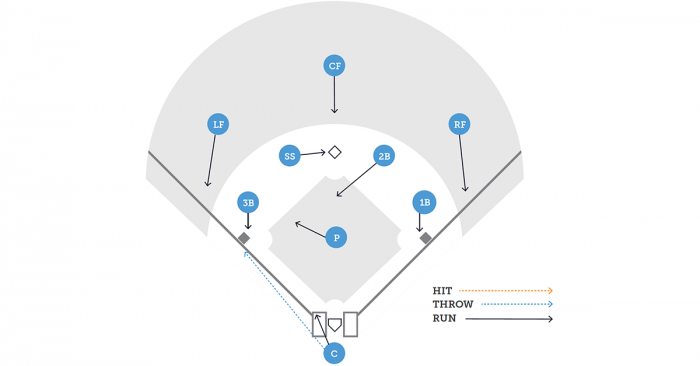 The Execution: Once again, the defense rotates as if a runner will be thrown out at second. After receiving the pitch, the catcher makes a quick, strong throw to third. The runner will steal second base, and we’re okay with that.

Considerations: First, the catcher cannot delay. Far too often, we see catchers get cute with this. Don’t fake to second. Just make an immediate throw to third. The runner is likely creeping in anticipation.

It’s absolutely critical that the left fielder charges to back up the throw to third. In the event of an overthrow, we need to keep the runner from scoring.

Catcher Throws Down to Second, 2B Cuts 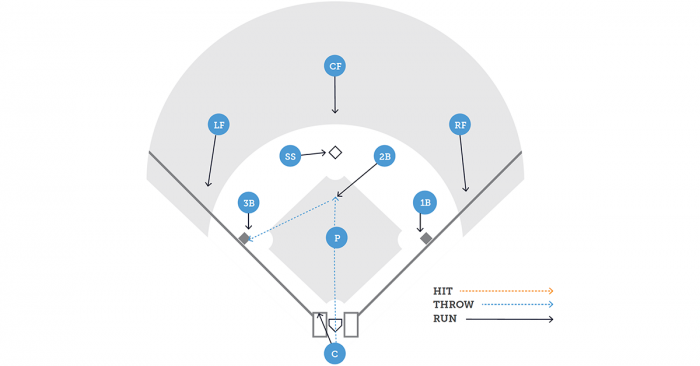 The Execution: The catcher should approach this as if he is throwing the runner out at second. His throw should be no different. It is the second baseman’s responsibility to cut in between the mound and second to field the throw. The hope is that the runner on third gets over aggressive.

Considerations: The catcher is critical to the success of this play. Often a catcher will wait for the second baseman to cut in front or his lack of urgency will make it clear that they have no plans to get the runner on second.

The catcher needs to make a throw as if he’s attempting to cut down the runner at second. As such, it needs to be a low line drive so that the second baseman can field it regardless of whether it’s on the base or 10 feet in front. 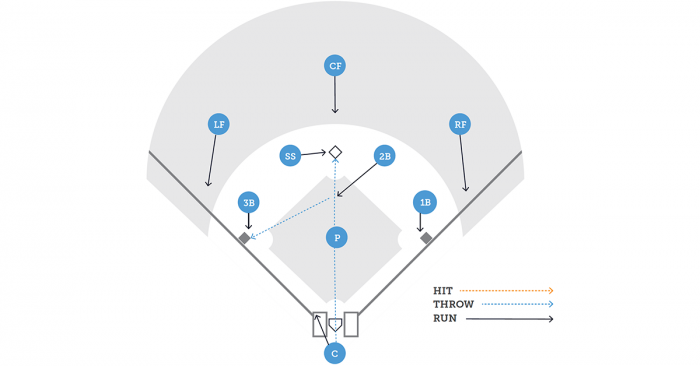 Considerations: This is a more complicated and sophisticated play that puts a lot of trust in your middle infielders. It may also be best used at the higher and older levels. For this to be executed properly, communication is critical. When pulled off, it’s very difficult for the offense to know how the defense is playing the situation.

How the Approach Changes

At the top, I mentioned how the situation will dictate which play you call. Let’s take a closer look…

If you have a fast runner on first, you may have no shot at him, even with a pitchout. As a result, trying to throw him out may be an unnecessary risk. But if you have a slow runner there, you may value that out more than the potential run that would score.

An ideal situation is when there are slower runners on both first and third. In that case, you may have a good chance at cutting down the runner going to second, and the third base coach may be hesitant to send the runner from third.

If there are runners on first and third with no outs, the chances are very good that the run on third will score — especially if you’re in the middle of the order. As a result, I may concede that run to get the runner at second.

Once again, it’s a balance of risk and reward. If it’s a slower runner on first, I’ll let that run score with no outs to decrease the potential for more runs by attempting to get an out.

But with two outs, it’s usually foolish to attempt to get the runner going to second. All you need to do to prevent the run from scoring is to get the batter out.

The Score and Inning

If we’re up by a bunch, I may care less about the runner on third and be more interested in getting an out on second — as opposed to simply allowing the other team to put two runners in scoring position.

Additionally, the inning matters. A three-run lead is much larger in the sixth than the third inning. So while I may try to keep the runner from scoring with such a lead in the third, I may concede that run and attempt to get the runner at second in the sixth.

This certainly matters. Always think about why the other team may be doing what they’re doing.

If it’s the bottom of the order with runners on first and third, you may be helping the other team by throwing the ball around. Their odds of a hit may be low, even with no outs. So by throwing to second, you are increasing that team’s chances of scoring a run.

On the flip side, what if the meat of the order is up? A hit becomes more likely, meaning a run scored is more likely. Because of that, we may concede the run in this situation, trying to prevent a runner from moving into scoring position.

If we do nothing with the best hitters up, we may have conceded two runs instead of one.

There are obviously many considerations when handling first and third situations, but hopefully this will equip you and your team with some options.

Any other plays that you’d add? Let me know in the comments below!