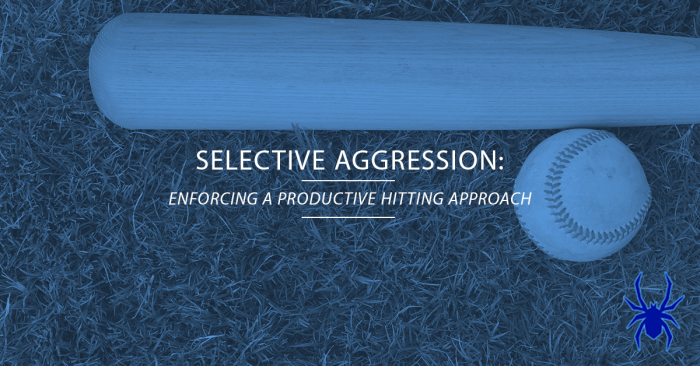 The one task in baseball that kids enjoy the most is also the most difficult: Hitting.

What most kids — and even parents and coaches — don’t understand is that hitting is much more than simply putting the bat on the ball. A good hitter is a player who knows the strike zone and swings at his pitch.

But this is something rarely executed by young baseball players. They swing at bad pitches. They take good ones. And they don’t understand how situation dictates being more selective or aggressive.

In this post, we are going to take a closer look at what makes a good hitter, and the approach that you can reinforce with your players.

The Purpose of the Strike Zone

This sounds elementary. In a way, it certainly is. But when you think about the purpose of the strike zone in the first place, everything starts to make more sense.

There are ball calls for a reason. If a pitch comes outside of the strike zone, it has been determined that it is not expected that the player should be able to easily handle that pitch. As a result, the umpire punishes the pitcher, assuming the batter doesn’t swing.

By swinging at strikes, you are giving yourself the highest probability to hit the ball hard. Hitting the ball hard leads to the greatest chance for a base hit.

The Myth of the Bad Ball Hitter

This is largely BS. While there is an exception to every rule, I do not find this to be true of youth hitters. Instead, they cherry pick examples of the few times they hit bad pitches hard and use that as why they should do it again.

I guarantee you that if you were to compare when this “bad ball hitter” swings at both strikes and balls you would find that he hits the strikes far harder than the balls. In my experience, these players may hit a higher percentage of bad pitches hard than normal, but they also get out by swinging at those pitches far too often.

The overly aggressive hitter can hurt his team. There are very few pitches he doesn’t like. He swings often, which typically means he’s in a count that favors the pitcher. And by regularly being in two-strike counts, he becomes susceptible to the offspeed pitch and also forces himself to be more aggressive to protect the plate.

The overly aggressive hitter doesn’t value the walk. He thinks that his role is only to hit the ball. He fails to understand that if the pitcher does not provide him something hittable, that taking a base is preferable to swinging at a bad pitch — a swing that will likely result in an out.

The overly aggressive hitter tends to see fewer pitches. As a result, this also gives baserunners fewer opportunities to move up on the bases. Fewer stolen bases, passed balls and wild pitches. That will lead to this player hitting into more force outs, but it will also result in fewer runs scored on singles.

Granted, the overly selective hitter can be just as bad, if not worse. This player will almost always take at least one strike, if not two or three. He is too cautious — almost afraid to swing the bat.

The overly selective hitter seems to be looking for a walk. They believe that they are more likely to help their team by taking a walk than by swinging the bat. This is often due to a lack of confidence.

When facing pitching that struggles to throw more than 55-60% strikes, the overly selective hitter can actually put up some acceptable stats. They don’t get many hits, but they walk and get on base plenty.

However, you can’t put such a hitter at the top of the lineup because they can’t be counted on against pitchers who do throw strikes. They are too cautious and become very likely to strike out looking.

Going back to the purpose of the strike zone, the batter is given up to three good pitches to work with (not counting fouls). Each time an overly selective hitter allows a strike to be called, they are wasting an opportunity to hit the ball hard.

You’ll often see the overly selective hitter strike out after getting only one swing. They need to understand what happened there — that they only gave themself one chance to hit the ball. They wasted the other two.

When a hitter balances selectivity and aggressiveness, the results can be magical.

This player then lets the bad pitches go by while attacking the pitches he can hit hard.

Note that the selectively aggressive hitter also understands his strengths and weaknesses. If he doesn’t handle the low outside corner strike well, he lays off of it until there are two strikes. We want to avoid weak hits, so taking a strike is okay when swinging at it is unlikely to result in a hit.

Help your players understand that the strike zone is there to help them. If a high percentage of their swings are at strikes — pitches they are supposed to hit — they can expect a higher hard hit ball rate. If they swing at pitches outside that zone, they can expect the opposite results.

You can even turn this into a game for certain hitters who believe they are “bad ball hitters.” Start charting when they swing at good and bad pitches and the results.

Finally, it’s all about repetition. Have them simply stand in the batting box and take pitch after pitch after pitch. Before you call a ball or strike, have the batter call out what they think they saw.

What examples do you have of players being overly aggressive, overly selective and selectively aggressive? And how do you enforce a productive approach?