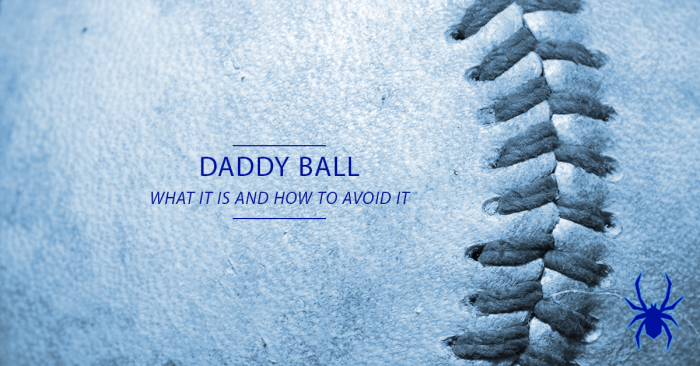 When I shared my post to Facebook the other day about the 9 Things to Consider Before Joining a Youth Tournament Baseball Team, I was somewhat surprised by the overwhelming response that I forgot a bullet point: Daddy Ball.

Are you thinking about having your child join a youth tournament baseball team? Make sure you do your homework!There's…

I personally haven’t had serious situations with this as a parent or a coach, as it is something that can be avoided. But it is a sensitive issue and something to consider when finding the right team for your child.

So, what is Daddy Ball? Why does it exist? What can both parents and coaches do to avoid it?

Is your child losing time due to Daddy Ball? Here's a closer look at coach's kid favoritism... Click To Tweet

What is Daddy Ball?

The emphasis here is on “detriment to the team.” If the coach’s kid is simply the team’s best player, then so be it.

Also note that perception is also reality here. Daddy Ball exists if parents think it does — it’s that simple. It’s not always fair, but it’s something a coach needs to address.

Daddy Ball — the way it’s perceived and defined — also extends to the assistant coaches. Parents can perceive that not only is the coach giving preferential treatment to his kid but to the other assistants’ kids. Again, this is based on the premise that these coaches’ kids are inferior players to other options.

The Source of Daddy Ball

Parents hate and try to avoid Daddy Ball, and I completely understand. Particularly if it’s a blatant case where the coach’s kid is clearly inferior to other options. But let me tell you — as a coach — how this can easily happen.

Of course there is also potential for bias here. It’s not necessarily wrong, but a coach trusts his own kid. He is less likely to trust another kid. So if the two are close in talent, it’s plausible why a coach would choose his own kid.

Daddy Ball, as defined, can extend to the assistant coaches. Again, there are blatant and more subtle examples of Daddy Ball in this case. But an assistant is the person who the head coach leans on for advice and strategy discussion. Like the head coach, an assistant will be biased to his own kid. That can naturally lead to more playing time for that assistant’s kid.

This all comes down to control. The coach is in a position of control and therefore determines the fate of all of the players on the team. The parents have no control, and this is an uncomfortable and potentially explosive situation when the lack of control results in unfair treatment — real or perceived.

A Coach’s Perspective: The Pitfalls of Daddy Ball

As a dad and a coach of my son, I’m sensitive to all of this. I’m conscious of the potential for Daddy Ball, and I actively make sure that this is not an issue. It’s important that the coach is aware of this and makes every attempt to make decisions as the coach and not the dad.

I can tell you first hand that it can go both ways. As a coach who is consciously aware of the potential for Daddy Ball, I may have limited my son’s opportunities in the past to prove a point. A coach can overreact to Daddy Ball, thereby harming the development of their own child.

I’m also my son’s biggest critic. I see flaws in his game that others may not see. I see him every day, in and out of practice and game situations. And on the flip side, the flaws of other players may not be as noticeable to me.

As a coach, there are a couple of ways to avoid this…

First, make sure that your child is not one of the weaker players on the team. I actually prefer that my son is neither the best nor the worst, but for the purpose of the Daddy Ball discussion it’s certainly bad if he falls on the weaker side.

This is a big issue, not only for playing time but assembling the team in the first place. If the coach’s kid is one of the weaker players, what happens when players with superior ability try out? The coach will obviously not cut his own kid.

Second, have an open dialog with assistant coaches and parents about the performance of the individual players. Have stats publicly available. Be clear about how you determine playing time (hopefully it’s mostly stats based). While not everyone will agree about which players are best — EVERY parent has a bias — this can help limit issues.

As a coach, I am very stats focused. I design lineups to favor the kids who get on base and hit the most. I pitch the kids who throw strikes and limit runs. I place kids in the field based on the ability to make plays and limit errors.

If a coach uses stats as the guide, the potential for blatant favoritism — actual or perceived — is limited.

While stats can be misleading — particularly in small sample sizes — it helps to have them as a defense. Because if there’s a perception that your child is unfairly getting additional time and you don’t have the stats to back it up, you’re in trouble.

Before you join a team, get a sense of the ability level of the coach’s kid. If he’s the best player on the team, you have very little to worry about. Any favoritism is at least partially warranted. The concern, though not always deserved, should be if that kid is one of the lesser players.

There is one pretty simple way to avoid Daddy Ball, but it doesn’t happen often: Play for a coach who doesn’t have a kid on the team.

In some cases, this could mean that it’s an academy team where the coach is paid. In others, it’s simply a coach who loves coaching — even though they don’t have a kid to coach.

This can be a great situation, if for nothing else but perception alone.

Understand that I do sympathize for both sides here. As a coach, I understand how Daddy Ball can happen. As a parent, I want my kid to get the opportunities he deserves.

But we’re all human. If you think you aren’t biased for your own kid, you’re a liar. And in some cases, the perception of Daddy Ball is built on nothing more than the bias of parents who aren’t coaching.

The best way to avoid Daddy Ball is to coach. If your response is, “I don’t have time for that!” then it’s a factor — hopefully small — that you can expect to deal with.

Have you experienced Daddy Ball, either as a coach or parent? How do you feel about it?