Something that separates the Spiders from most youth baseball teams is that we hold Chalk Talk classroom practices — particularly during the winter and early spring months. These classroom sessions make a big difference on the field during the season.

You’ve seen the agony from coaches during games. “Why are you not where you’re supposed to be?!” Or “What are you thinking?!” Coaches may cover certain situations during an on-field practice, but they’re missing an important opportunity for understanding and reinforcement.

The practice field is a good place for movements, reps, and drills. But it’s not always the best place for deep thought and conversation on strategy and responsibilities. That’s why the Spiders hold several one-hour classroom sessions for this purpose.

The Spiders have a playbook that outlines every player’s responsibilities for cutoffs and backups based on the situation and type of hit. While the players should study and learn this guide, it’s also important to walk through the responsibilities and why. 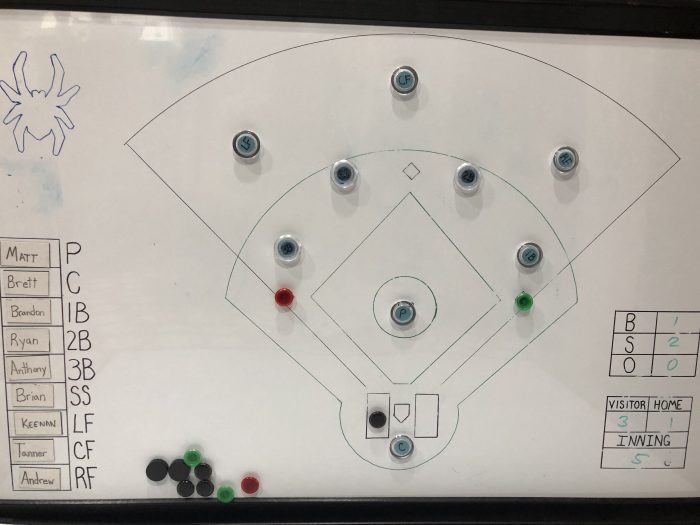 The plan is to create something more polished for future seasons, but this whiteboard definitely does the trick for now. Here’s how it works…

On the left-hand side, I’ve assigned nine players a position. Those who aren’t assigned will often be a batter or baserunner to allow them to think through the situation from that perspective.

The situation includes the following:

Some of this won’t apply to backup and cutoff responsibilities, but it will come in handy for other situations discussed below.

Given the runners on base, I’ll say that, for example, there’s an extra base hit over the left fielder’s head. Grab the magnet for your position, and move it to where you need to be.

After each player moves his magnet, we’ll talk about it. Did you get it right? If not, why should you be in a different place? Why are we moving where we are? Are there any gray areas and other considerations?

The result is that we’re often very crisp on cutoffs and backup responsibilities, leading to executing more outs on the bases via relays and preventing runners from getting extra bases that they don’t earn.

We use this same whiteboard as a jumping off point for discussion of hitting situations and approach.

Once again, we provide a situation, but this time from an offensive perspective. We know which bases are occupied and by type of runner, the count, outs, score, and inning.

How does this situation impact your approach? For example…

With a runner on second, you’re looking to hit to the right side to move him over.

With a runner on third, you’re looking to drive him in via fly ball or ground ball.

With a 2-0 count, you’re looking for a fastball in your wheelhouse that you can drive.

With a 2-strike count, you’re looking to shorten up, make any contact, and thinking up the middle or opposite field.

With a 3-0 count and a runner on second with two outs, you’re going to be aggressive on your pitch.

Or would you? That’s the whole point of this discussion. We want kids to be thinking about how their approach changes based on the situation and to thoroughly understand why. As a result, they have a strategy when coming to the plate without coaches having to remind them.

If you ever come watch the Spiders play and you pay close attention, you may notice one very minor difference between the way our pitchers and catchers interact compared to most teams: Our catchers call the game.

For most teams, the coaches are sending in signs for every pitch. I’ve seen this all the way down to the 9u level. We don’t do it, and for a couple of primary reasons.

Second, coaches give very simplistic signs that are easily stolen. The signs have to be quickly and easily understood by the catcher. As a result, any parent, coach, or player paying attention can often decode those signs after only a handful of rounds. The result: Your pitchers may suddenly get rocked when hitters “strangely” adjust well and seem to know what’s coming.

The catcher will make mistakes. But he may also do things the coach wouldn’t that actually work. The end result is that the catcher will consistently improve in this area.

Calling a game becomes an area to teach and learn. It’s something we focus on during these Chalk Talk classroom sessions.

How do we approach the first batter versus the third or last batter in the lineup? How might that change based on strength of the opponent?

How does our approach to calling pitches change depend on the score? The inning? The count?

When is a good time for an offspeed pitch? How does having a runner at third in a close game impact your pitch calling?

The beauty of pitching is that there are plenty of gray areas where there isn’t necessarily a right and wrong answer. Sometimes, being unorthodox and unpredictable is effective.

But it’s important to talk through situations so that pitchers and catchers have a plan of attack.

We use this whiteboard to talk through baserunning situations as well — both offensively and defensively.

We also talk through how to defend baserunning situations. One, in particular, is the first and third situation. What is the opponent trying to do? How does the speed of each runner impact our approach? Why does the score matter? How would the number of outs impact our strategy?

The conversation is often centralized around what the opposition is trying to do and why. Understand that first. Now, do we want them to be able to do that? If not, how do we stop them?

You can hammer away at your team goals and philosophies while on the practice field or before and after games all you want, but it’s helpful to set a firm foundation in a classroom setting. This allows your players to contribute to the conversation.

Use a blank whiteboard to write down thoughts like…

What are ways that you can show hustle?

Why does hustle matter? How does it impact the game?

What are examples of things that separate great teams from everyone else?

What are ways that you can positively and negatively impact your teammates based on your attitude?

How can you show respect for umpires, teammates, yourself, opposing players, and coaches?

What kind of team do we want to be? What are our goals? How do we define success?

This is just a starting point, but these classroom sessions can be very productive as we put these types of things in writing.

Do you implement classroom sessions for your team? What are other ways that you use them?