When it comes to hitting at the youth level, we often talk about a general approach or strategy, like being selectively aggressive. But I want to provide something more substantive. Today, let’s look at statistical evidence that shows the advantages and disadvantages of hitting in certain counts.

We tell our young hitters to be aggressive on strikes on the first pitch and when they are ahead in the count. We tell them to let the bad pitches go by, but to take advantage of the opportunities to hit the good ones. But do they know why?

In its basic form, hitting is simple: Swing at strikes, don’t swing at balls.

Of course, it’s not always that simple. Different speeds can be used to deceive hitters, enticing them to swing at pitches out of the zone or mistime their swing. When the pitcher is most effective, the good pitch isn’t always easy to identify.

The key is to be in these counts so that a hitter is ready to take advantage of the situations. A hitter also should want to avoid being in two-strike counts because it is the least predictable situation — and one where the hitter has the least amount of control and may need to swing at something they don’t like just to stay alive.

So, the theory goes, we want to be aggressive on pitches that are most likely to be fastballs for strikes. This would include any count where the hitter is ahead, but particularly 3-0 and 2-0. The pitcher needs to throw a strike to avoid a walk.

But it may also include the first pitch. Why? Because it’s so important to start ahead in the count. Get ahead, and the pitcher has more options. Fall behind, and he’s forced to come in with a predictable fastball strike.

Note on Age and Level

Of course, this applies most to older ages and higher levels, where offspeed pitches are an important part of the game. If you never have to be concerned about the surprise of an offspeed pitch, it’s one less factor to complicate your at bat.

That said, it’s always a challenge to be in a two-strike count, regardless of the level. The batter is forced to expand his zone and protect the plate, particularly when having to guess what an inexperienced umpire may call for a strike.

We have a hitting theory, or a general strategy or approach to an at bat and why. But what do the stats say? Are some counts more advantageous than others?

The first place I wanted to look for answers was Major League Baseball. While results from the pros won’t always apply to youth baseball, I know that I can get a large sample size of results that will actually mean something. That, of course, can be more difficult at the youth level.

Thanks to Baseball-Reference.com, I was able to collect league-wide splits based on the pitching count for an entire season. I decided to focus only on the American League, to eliminate the outlier of pitchers hitting. And I also decided to take three years of data (2015 – 2017) — simply because I could. 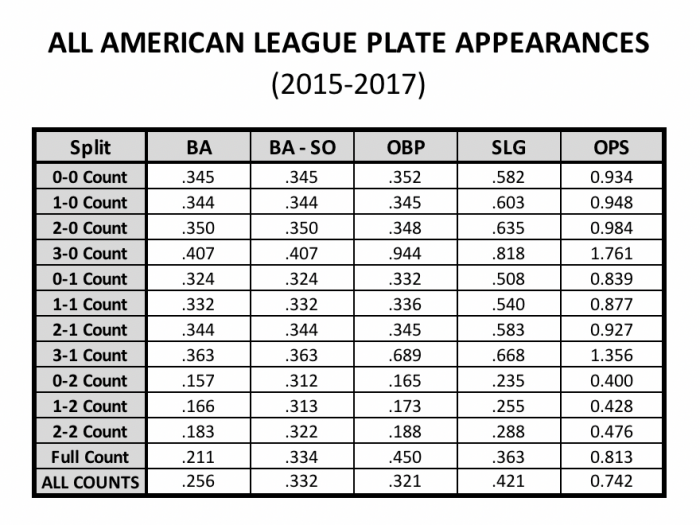 The table above presents the results when a given plate appearance ends with a given count. That could mean a swing (hit, out, strikeout) or no swing (walk, strikeout, or hit by pitch).

Take a look at the table above. Here are a few points based on that data…

2. Once a hitter takes that first pitch strike, he won’t return to the same odds of success again until getting to a 2-1 count.

5. Not surprisingly, any count with three balls also had the highest on base percentages since the next ball would result in a walk. Plate appearances that end immediately after a 3-0 count have a startling .944 on base percentage.

Overall, the main learning here is that it’s important to avoid a two-strike count. Being overly selective early in the count will contribute to eventually reaching this point.

Since I had plenty of data to work with, I also wanted to see how two-strike results looked without strikeouts. My thought was that I want to get a sense of the quality of hit when put into play.

My theory: Having two strikes is bad not only because a strikeout becomes possible, but because a hitter is more likely to hit the ball poorly when protecting the plate or expanding the zone to avoid that strikeout.

We can theorize that averages come up a bit for 2-2 and 3-2 counts because the pitcher becomes slightly more predictable, particularly in a full count.

The Spiders’ season is still young (we’re 17 games in), but I decided to take a look at how the count impacts results in our games. To help with sample size, I included both our results and our opponents’. 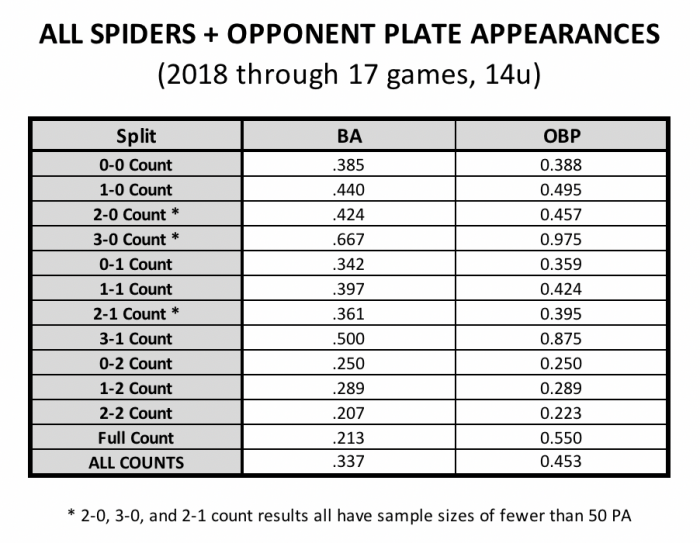 In other words, take these results with a grain of salt. They’ll mean more as I’m able to add to this throughout the year. But for now, a few thoughts…

4. The worst counts for the hitters are again the two-strike counts.

Since sample size was already an issue, removing strikeouts, in this case, wouldn’t provide any meaningful results. This is again something I can revisit after the season.

What This All Means to Hitting

Let me do my best to summarize how this impacts hitting…

1. Be aggressive with a purpose on strikes in predictable counts. This doesn’t mean you should be overly aggressive on 0-0, 1-0, 2-0, 3-0, and 3-1, swinging at pitches out of the zone. And simply swinging at the strikes isn’t enough here either.

A foul will put the batter into a disadvantageous count. A swing and miss will also hurt him. It’s important that the hitter be aggressive, but on strikes that they can hit and with the purpose of putting the ball in play.

2. Focus on fastballs in predictable counts. There’s a reason hitters are more successful in 0-0 counts than 3-2 counts, even when removing strikeouts for Major League players. The first pitch is more predictable than on 3-2.

Look for a fastball, don’t react to it. If you don’t get a fastball in those counts, let it go.

3. Taking strikes is still okay. Understand that the point of this isn’t to say that you should swing at strikes at all costs while in advantageous counts. Maybe the pitcher throws an offspeed pitch at an unpredictable time. Let it go. Maybe he paints the corner and throws a strike that is difficult to hit. Let it go.

Even if your odds drop as a result of letting a strike go, swinging at these pitches would not likely lead to positive results.

4. The first pitch may be the most important pitch. It’s probably a fastball. The pitcher wants to get ahead. It may end up being the best pitch you get in the at bat. Sit on a fastball in the zone. If you get it, hit it. Just as importantly, let the bad one go by.

Many coaches advise taking the first pitch, no matter what. I was one of them when coaching the 8-10 age groups. But with time, I’m realizing this is likely not the best approach at higher levels.

The key is to not only be aggressive in these counts but to be ready and have the intent of hitting the ball hard in play.

This post has focused on hitters and how the count impacts their results. But this can be just as easily turned around to focus on the pitchers.

As a pitcher, we know that…

2. Get to two strikes. Once you do, the hitter needs to protect and will take worse swings to stay alive. You are in control as long as you have two strikes.

3. Avoid three-ball counts. Well, duh, right? Walks are bad. But whenever you’re in that 3-0 or 3-1 count, in particular, the hitter has a very big advantage over you. It’s a tough place to be.

4. Pitch to contact. All of this can be accomplished if your primary goal is to pitch to contact rather than hope that the batter swings at a bad pitch. By pitching to contact early in the count, you can get more creative deep in counts when you can try to get the batter to hit your pitch.

We could write an entirely separate post on the topic of pitching related to counts. We just might have to do that!