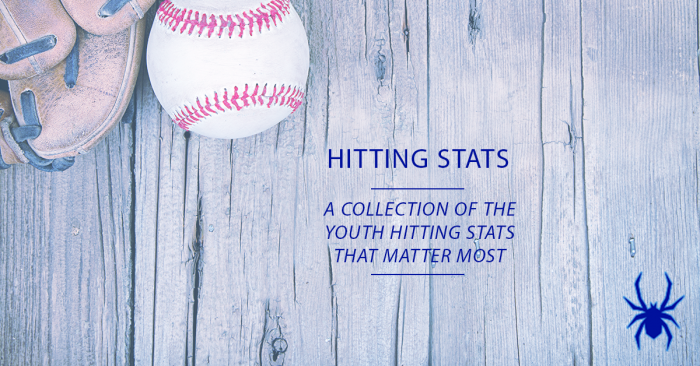 It’s a responsibility I both love and loathe. I love the strategy portion of it, fitting the pieces together in the best possible way. I loathe determining that certain players need to sit, play less, and get fewer opportunities. But it’s part of the job.

It’s a responsibility, though, that I take seriously and want to get right. Getting it right requires paying close attention — not just to any stats, but to the right ones. It also requires understanding context as well as prioritizing which stats are more important than others.

[NOTE: See this post for the Youth Pitching Stats that Matter Most.]

The value of the stats a coach bases decisions on is only as high as the quality of the scorekeeper. Pick your scorekeeper wisely.

They should be well-versed in how to score a game. This can’t be taken for granted. Don’t assume they understand how to score sacrifice flies, sacrifice bunts, and a fielder’s choice, for example. Getting them wrong can significantly throw off results.

Also, make sure that bias won’t be a problem. They can’t use their power to influence stats positively for their kid and negatively for the kid he’s competing with for playing time, for example. It’s one reason why I choose not to count errors. It removes subjectivity.

They also need to be thorough and committed. For many of the stats below, there is plenty of room to get lazy and get it wrong. Was the ball hit hard? Was it a line drive? Was it a popup? Was the batted ball thrown out of the zone? For many of these stats to have value, the scorekeeper must be vigilant.

Ultimately, you need a scorekeeper whose focus is only on accurately documenting exactly what happened.

There can be a wide variance in plate appearances due to lineup order. Then add in factors like missed games and substitutions, and the total becomes less and less valuable.

There are times when the software that you use doesn’t provide a rate. I then calculate it manually.

The two most popular apps for scorekeeping these days are Gamechanger and iScore. I’ve used them both, and each app has its own advantages and disadvantages.

In fact, I use them both this year in addition to a third scorekeeper who records manually. It may be overkill, but there are good reasons for it.

Gamechanger is the easiest app to use for family members following the game. It’s really not even close. iScore is a major headache in that area. I also prefer Gamechanger for easily accessing stats and information on the run as the coach.

But iScore has one huge built-in advantage for stats nerd coaches like me: An incredible depth of statistics. Gamechanger is fine for most coaches, but iScore provides so much that Gamechanger does not. If that’s important to you (it is to me), it’s a big deal.

As a result, I have one scorekeeper on Gamechanger for families and one iScore for me. Since some parents seem to insist on documenting errors (I hate the stat, as mentioned before), they can knock themselves out with errors on Gamechanger. But the stats I care about will be on iScore.

The manual scoring is then mostly as a backup. Sometimes one or both of our other scorekeepers may not be around. Or there are technical issues. It’s good to have good, old paper and pencil, too.

I create a dashboard in iScore that focuses on the stats I care about most. I do need to export in order to calculate a few of these rates.

Here are the hitting stats I find most important…

OPS: OPS is On Base Percentage + Slugging. It’s not perfect, but it does a good job of providing the total value of a player, combining the ability to get on base and power.

Adjusted On Base Percentage (OBPE): iScore provides the ability to pull the true rate that a player reaches base, including errors as a time on base. This is otherwise viewed as an out and counts against the OBP.

Particularly at the youth level, we know that fielding is far from perfect. If you put the ball in play, you are giving yourself a chance to get on base. So it’s good to know how often a player gets on base, no matter how they do it.

Batting Average provides little context. For example, a player may get hits at a high rate but walk at a low rate. They may then get on base at a below average clip. Or the hits they get may all be singles, which would be accounted for with OPS.

Of course, On Base Percentage isn’t enough in itself, either. If a player gets on at a high rate because he walks a lot, he may not be a dependable hitter in a crucial situation where a pitcher is expected to throw strikes.

It’s all a balance.

Contact Rate: This is generally calculated as (PA – K)/PA. What percentage of plate appearances result in something other than a strikeout?

A player who strikes out a lot often provides risk and reward. If he is also a power hitter who can hit lots of extra base hits, you may be willing to accept more strikeouts. Less the case with singles hitters.

At the youth level, though, we know how important contact can be. Even against some of the better teams, a ball in play gives the hitter a chance. A high contact rate is preferable.

Line Drive/Pop Up Percentages: Typically defined as the number of line drives per ball in play (or pop-ups per ball in play). For this information to be valuable, it’s critical that you have a iScore scorekeeper who tracks this accurately. There are some gray area and level of subjectivity as well, so the stats aren’t perfect.

You of course want a high line drive rate and a low pop-up rate. These stats can be indicators of what to expect going forward. For example, maybe a hitter has been fortunate to rack up lots of pop-up hits. That success is unlikely to continue. Or maybe they are lining into outs at an irregular rate. Their luck is likely to turn.

Hard Hit Percentage: This is closely related to line drive percentage, but you can have a hard hit ground ball or fly ball as well. Any hard hit ball is preferred.

This is another stat found within iScore.

Swinging Strike Percentage: What percentage of all pitches thrown results in a swing and a miss? This is a good indicator of overall dependability of the batter being able to have a productive approach resulting in laying off of a bad pitch, hitting a ball fall, or putting it in play.

Walks per Strikeout: A batter with good command of the strike zone and who makes good, consistent contact will have more walks than strikeouts.

Balls/Strikes Looking/Strikes Called/Fouls/In Play Rate: This is a matter of knowing the rate of balls, strikes looking, strikes called, fouls, or balls in play over total pitches seen. It’s a rate that needs to be manually calculated after first collecting the other metrics.

Over a large sample size of pitches seen, most batters should see a similar number of balls and strikes. There’s some variation due to strike zone size, but I’ve found it to even out for most and not be that closely related to batter size.

This season, 42.5% of all pitches thrown to Spiders have been recorded as balls. That, of course, doesn’t account for pitches swung at outside of the zone. But we use it as a starting point. Anything dramatically less than that would be an indicator that the batter is likely swinging at bad pitches too frequently.

In the case of our team, ball percentage varies from 33.0% to 50.4%. One is clearly much more patient than the other. The batter seeing only 33% balls could likely walk more as well as see benefits from swinging at more pitches in the zone.

Anywhere from 10.0% to 20.4% of pitches thrown to our batters result in a strike called. The batter at 20.4% needs to be more aggressive.

Strikeouts Looking Rate: Of course, the context of when the batter is taking strikes matters, too. Some batters hate swinging at the first pitch and want to see a pitch to time up the pitcher. That wouldn’t be nearly as bad as taking the third strike.

This stat is calculated manually by dividing total strikeouts looking by the total number of plate appearances. The average Spider strikes out looking 5% of the time.

Anything more than 5% is a sign that the batter isn’t being nearly aggressive enough with two strikes.

First Pitch Swing Percentage: While some batters prefer to take the first pitch, I’d argue that it’s not the best approach. As the kids get older, it’s the one pitch that is most likely to be a fastball for a strike. It’s often the best pitch to hit.

The average Spider swings at the first pitch 37.2% of the time. Anything significantly more than that may be a case of over aggression. Anything at the other end of the spectrum may indicate that a batter isn’t being aggressive enough.

First Pitch Swing Success Rate: Of course, the previous stat goes hand-in-hand with this one. Is the batter generally successful when swinging at the first pitch? If not, taking it may not be as big of a negative.

Meanwhile, our two batters with the highest First Pitch Swing rate also have above average First Pitch Swing Success Rates. While this may still provide an area for improvement, their overall aggressiveness has been a positive.

Batting Average on Balls in Play: At the Major League level, this metric is often used to determine good and bad luck. On average, BABIP should be rather consistent from player to player. So any wide variation would indicate an eventual return to the mean.

For youth baseball, it can potentially be used to spot luck factors. It can also be an indicator of whether the batter is consistently hitting the ball hard. Usually, a batter who hits the ball hard regularly will have a higher BABIP.

It’s also a good stat to show players who strike out too often. If they didn’t strike out, this is the average they could have!

Swings Outside the Zone Percentage: This stat is only available if you have an iScore scorekeeper who diligently tracks whether a pitch was inside or outside of the zone. Granted, there is a large amount of subjectivity and a great deal of room for error, but it can be valuable when done well.

Otherwise, you can always focus on the percentage of balls and strikes documented above to get a general idea of a batter’s command of the strike zone.

These are the hitting stats I care about most. Any other stats you’d add?