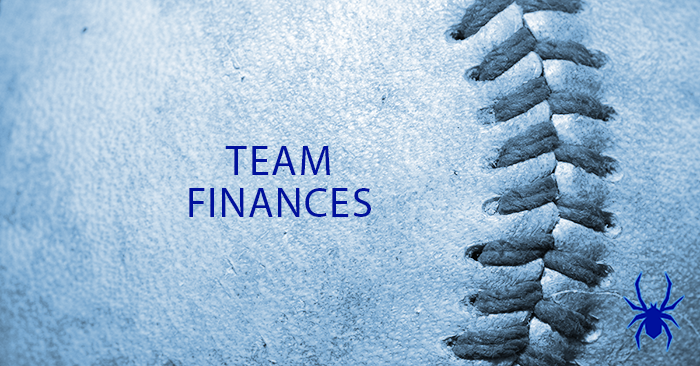 As a father of three baseball players, I’ve coached youth baseball for more than 10 years now. However, this first season of the Spiders marked the only time I’ve been required to manage the financials of a team.

Money is near the top of the list as factors that tear a team apart. If families don’t trust the coach or organization with their money, the team is doomed.

I’ve learned a lot during this first season, and many of my lessons have to do with administration of the behind-the-scenes duties associated with running the financial side of a youth baseball team. In this post, I want to share what I’ve learned and what I’ll apply in our second season so that you can do it right the first time.

Under Estimate the Number of Players

This was one of my primary mistakes in the first season of the Spiders. My plan was for there to be 11 players. The ideal 11th player never came around, so we played with 10.

That’s a problem, of course, since I projected expenses based on 11 players. With only 10, that means we need to absorb the costs of that 11th player.

How do we do that? We can raise money. We can cut costs (usually tournaments). Or I can ask for more money.

My payment estimates are based on 10 players even though I fully expect to play with more.

Over Estimate All Expenses

Research all expenses for the appropriate age. Remember that costs go up as kids get older. Then add 10%.

That doesn’t mean your parents will pay 10% more. It just means you account for the possibility that some things will cost more than expected.

For the 2016 season, I calculated the annual cost and divided by four. I then asked for four quarterly, equal payments.

That sounds reasonable, but it misses something very important: The majority of expenses happen prior to January.

The one payment we have every month is for our training facility. That doesn’t change.

The other issue with quarterly payments is that they may not fall at the time when you need them most. I really needed a payment in December, for example. However, they fell in November and February.

This next season, we’ll have monthly payments. Families can feel free to pay more at a time if they can or prefer. But this allows for a constant stream of funds. And those fees will decrease after the first of the year.

Here’s an example of what I’m projecting based on percentage of total annual team fees paid per month (based on 10 players):

NOTE: The above adds up to 112.5%. If an early payment is made, it will be subtracted from the first payments.

Request an Early Payment to Reserve a Spot

As a second year team, we’re in a tricky part of the year. Tryouts are beginning. Some may be 100% committed. Some may want to see what else is available before making a commitment. Some may know they want to look elsewhere.

I don’t want this to be uncomfortable. This team is not right for everyone. It’s okay. I won’t be mad at you if you try out with another team or if you leave. You need to look out for your kid’s best interests.

At the same time, I need to look out for the team’s interests. So it’s really important that I know what I have committed and how many players I need to add.

Starting this season, I’ve made a simple request: If you’re 100% ready to commit to the Spiders, make an early $500 payment (non-refundable). If you’re not ready, that’s perfectly fine. But in the meantime, I need to fill a roster.

This may seem hard-lined, but I don’t think it is. It’s fair. I don’t expect everyone to make the early payment. There won’t be hard feelings. But understand that I need to fill my roster in the meantime.

Something else to consider here is that this isn’t a matter of buying a spot onto the roster. We need to have conversations first to make sure it’s the right fit prior to making these commitments.

Don’t Be a Martyr — Include Everything

During this first season, I wanted everything to be perfect. I wanted to keep costs down. I wanted to provide the most value possible.

So when I made some of the mistakes outlined above (over estimating number of players and under estimating expenses), I ate the difference in most cases.

I also paid for many of the things that would be normal to include in team costs (game balls, practice balls, pullovers, banner, iScore, TeamSnap). That was my choice, and I hold no bitterness. Again, I wanted to do that because I wanted to keep costs down for families.

This team is my baby. I’m fine paying extra.

But that may not be the case for everyone. And going into our second season, I include many of these costs in team expenses as well.

The bottom line is that you shouldn’t take on extra expenses if you aren’t okay with it. You will only become resentful. Don’t be a martyr. Parents will understand if you need to ask for more.

But we really want to avoid asking for more — that’s why we need to plan better!

Put Someone In Charge of Fundraising

You’re the coach. Seriously, that’s enough. You don’t need to do everything!

If families want to save money on baseball expenses this season, someone needs to step up. It won’t be you. It shouldn’t be your spouse. If there is a desire for fundraising, invite a parent to be in charge of it.

If not? That’s fine! No fundraising. One less headache. But you absolutely should not be in charge of it.

What I’ve found is that if parents really want to raise money, someone will step up and take control of it. The last thing you want is to take on a new responsibility when no one is all that interested in raising funds in the first place.

Your Goal: Give Money BACK

One of my most difficult conversations this season was asking for more money. It was the worst. The parents were fine with it. But I absolutely hated it.

The funny thing is I really didn’t ask for much at all. As mentioned earlier, I already paid extra. I did everything I could to limit expenses. So when I asked for more, we’re only talking about $25 here or there. But that didn’t make me feel any better about it.

Your goal should be to overestimate so that at the end of the season, you can give parents a surprise with money back. That is much better than telling them you need more, and parents will appreciate it.

Have Someone Other Than the Coach Manage Finances

Maybe you’re an accountant, too. But my guess is that you aren’t. Don’t burden yourself with this responsibility.

Of course the question then becomes, “who?” For me, it’s easy. My wife handles my business financials. She’s much more organized than I am. She does a much better job than I could.

Whoever handles this, it needs to be someone very close to you. Someone you trust 100%. And if it’s not a family member, no matter how much you trust them there need to be several checks and balances in place to make sure that funds are being managed properly.

I guess that brings us back to why it’s so easy for the coach to take on this responsibility. If you can avoid it, though, stick to coaching.

This is way down at the bottom, but it should probably be listed first.

For our first season, none of my mistakes were a big issue because I was transparent. I sent out regular financial reports showing where we were, what I was spending money on and what costs would still be required.

The bottom line is that there can’t be an ounce of doubt about how the money is being handled. None. Zero. If you even give the impression that you’re hiding something, all trust is lost. The assumption is that you’re overcharging people and pocketing money.

Don’t let that happen. Be very, very clear about what everything costs, what everyone is paying and when everything is being paid for. Provide regular reports. If additional funds are required, be very clear as to why.

Ideally, any costs that end up going beyond what is expected should be a conversation among the families. This tournament or item is going to cost more than expected. If we’re going to do this, we need X number of dollars. Is everyone okay with it?

I’m still pretty new to this side of running a baseball team from the administrative side, but these are the financial lessons I’ve learned. They’ll come handy in our second season!

Anything else you’d add? Let me know in the comments below!