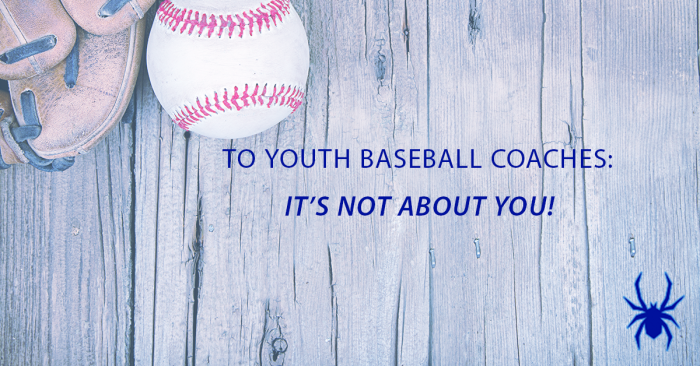 I don’t know it all. I’ve learned plenty, though, and it seems that I learn quite a bit more with each passing season.

I wouldn’t go so far as to say I thought I knew it all years back, but I’d like to knock the old “me-coach” upside the head. It’s not about you, coach!

In my opinion, the coach should be mostly invisible. The players put on a show, and the coach stands in the background. The problem is that the coach far too often becomes the sideshow.

I learn from other coaches — both good and bad. I see where I can improve, and I learn from things I absolutely don’t want to do.

Sometimes I’ll shake my head at a coach’s reaction to players, but then I wonder: Is it possible that I’m perceived the same way sometimes?

I have no problem admitting that I’m an intense coach. I have high expectations of my players, but it’s less about performance and more about process (at least these days).

I don’t have it all figured out. I’m still learning. But here are a few things that guide me to make sure my players are having a positive and rewarding experience…

It's not about you, coach! Here are 9 considerations to create a positive experience for players... Click To Tweet

I coach a 12-year-old team, so understand that as my perspective. My goal is to provide these boys with the tools they need without constantly telling them what to do.

I don’t want full control of every play made on the field. I feel that does the players a disservice. By having full control, I am merely coaching robots, not baseball players.

I am not a coach who feels the need to call signs for every pitch thrown. In fact, my preference is to never call a single pitch.

When a catcher has played for me, I want him to learn the game — not be a robot who follows my instructions. I want him to think through the situation and call a game himself — inside, outside, high, low, fastball or offspeed.

When he moves on to high school, that catcher will be ready to manage a pitcher, regardless of whether the coach is giving him signs. He will understand situations. He will pay attention to where we are in the order, what a hitter has done before and what pitches have worked.

It’s not just catchers, of course. But my goal is to provide structure while controlling the bare minimum.

As coaches, we should want the kids to own the game.

2. Make Sure Players Are Prepared

A coach can go too far with relinquishing control as well, particularly if he fails to provide structure. If a coach provides very little structure, the result will be little more than sandlot baseball. And in most cases, these kids want and deserve more than that.

While I don’t want to control a game, it’s important that my players are prepared. They need to understand the game, situations that may arise, their responsibilities and why they would and would not do something.

That’s why practices are so important. Teach them the game. Help them understand not only that they should do something a particular way, but why they should do it.

Don’t just tell them to do something a particular way, but ask them questions and guide them to discovering the right answer. For example…

There’s a runner on third and two outs with the bottom of the order up. Should we try to back-pick that runner?

When is a good time to try to pick off a runner? When is a bad time? Why?

They may not know the answer immediately. The answer may not always be black and white. They may not immediately see the risks and rewards. But help them understand the options instead of simply telling them to do something.

As I mentioned earlier, I can be an intense coach. I make a conscious attempt to be calm and relaxed, but it’s entirely possible you’ll catch me in a bad moment.

However, there is a difference between a physical and mental error. And even the mental errors don’t all deserve discipline.

Youth players won’t hit the ball every time. They won’t make every play. And of course, mistake frequency will be greater or smaller depending on the level.

Many of the physical errors (a fielding error or bad result at the plate) come due to lack of reps. Those things are going to happen. We want to do our best to limit them.

A mental error (not knowing a responsibility or failing to execute per instructions) happens due to lack of preparation.

It’s not that a coach — or that I, as a coach — should be happy with all mistakes equally. But understand that mistakes are part of the process.

When a player makes a mistake, what happens? Is he embarrassed? Does he put his head down? Does he lose focus? Does he become scared of making mistakes?

Help your players know that they aren’t perfect. You have certain expectations based on preparation, but mistakes will happen. The key is that your players learn from their mistakes and do their best to limit them.

As a coach, also understand the element of pressure. We played in our first tournament as a team this past weekend and played in a championship game. It was our fourth game of the day, and we blew a 5-0 lead to lose in extra innings.

Physical mistakes began to happen. These kids weren’t able to handle the combination of exhaustion and pressure since it wasn’t normal to them.

Know that such an experience — even a negative — is great for them. They’ve been through it now, and they’ll have better perspective the next time they are in a similar situation.

This is closely aligned with #3, but it’s important to include it separately.

When a mistake is made, what should have been reasonably expected?

A coach should first focus inward: Did you properly prepare your player for this situation? Did you place him in a position to succeed? Should your player have known what was expected of him? Are you at least partly to be blamed for the lack of execution?

This should give you perspective on your level of disappointment for the player. But after that, you need to be intentional about how that disappointment is addressed.

Understand that I’m not saying that tough love isn’t required at times. If you see me in action as a coach, I am certainly not all about lollipops and rainbows.

But make sure that any correction is productive. Pull them aside (or have an assistant coach pull them aside) and help them talk through what happened and what they should have done. Help them focus on learning from the experience instead of being embarrassed by the outcome.

If we as coaches don’t focus our disappointment productively, we can expect the same negative result to happen over and over again.

Do the players enjoy playing? Are they prepared? Do they react negatively to adversity?

Are the coaches constantly ripping players for mistakes? Do they blame umpires and argue incessantly?

Are parents remaining positive? Are they yelling at the umpires?

A positive environment starts and stops with the coach. If parents or players are misbehaving, you can bet this is reflected from the top.

As a coach, understand the impact of your actions and reactions. Your players and parents feed off of them. You model what is and isn’t acceptable.

6. Be Far More Positive Than Negative

I understand that this is often easier said than done, but it’s an important goal for all coaches.

Constructive criticism and discipline are important. But you must balance it out with positivity. In fact, positivity must far outweigh negativity.

Make an effort to connect with your weaker players first. Help them see that they are valued.

Start and end a post-game speech with positive statements. Don’t ignore the negative. Just don’t dwell on it. Frame it in a constructive way to help your players learn from it.

Don’t ignore when a player does “what is expected.” Point it out, and use it as a model for the rest of the team. Make sure that this modeling is done for all players, not focusing on the good deeds of the “best” individuals.

This helps players not only acknowledge when they make mistakes but strive for a positive and preferred result.

I once heard a coach yell at his players, something along the lines of, “You’re playing my game! Do what I tell you to do!”

This is an absolutely awful way of looking at our role as coaches. It says that the players are unimportant. That they are simply there to make you look good.

This isn’t your show, man. While I will wholly acknowledge that we as coaches share in the glory when things go well, that should not be our motivation for doing what we do.

The game is owned by the kids. Our role is to guide them, but to be in the background. When we put the spotlight on ourselves, our priorities are out of order.

Help these kids improve their skills. Help increase their love and passion for the game. Help prepare them for the next level. Help them grow as players and as people.

Beyond that, your role is to get out of the way.

This is easy to forget. We’ve all had our weak moments, but it’s so important that we as coaches model good behavior.

We can’t tell parents and players, for example, to respect umpires while we attack them for a perceived bad call.

We can’t expect players to be graceful in defeat if we fail to congratulate the opposing coach and shake his hand.

Take every opportunity you can to set a good example, particularly when things don’t go in your favor. Congratulate the kid who just made a great play. Treat the umpire calmly and respectfully when a call is up for debate. Spotlight the opposition when they model the behavior you want from your team, in victory or in defeat.

Our primary goal is to make this a good experience for our players. When they run onto that field, they should be having fun. It should be obvious to everyone that they enjoy playing the game.

You won’t win every game. You shouldn’t expect kids to enjoy losing. But regardless of wins and losses, your role is to make sure that it’s a positive experience either way.

And let’s not assume that winning leads to happiness. I’ve seen kids that are completely miserable while playing for a successful team. It’s all about the environment.

That doesn’t mean that it’s time for your child to stop playing baseball. But you should evaluate whether the current environment (coach, team or level) is right for him.

This is primarily from the perspective of a coach, though I’m certainly an observing parent as well. Anything you’d add to this?