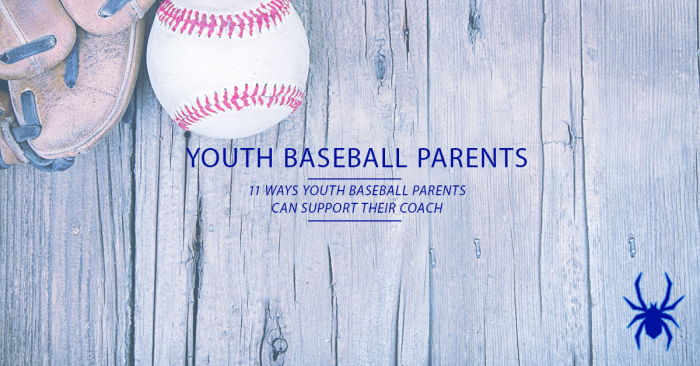 Youth baseball parents have a difficult job. On top of making sure your child is dressed, fed and prepared, you get to sit in the stands while all of the pressure rests on him.

However, there are several things that you can do that will not only help your child, but help your coach and the team. A team of parents who fulfill these 11 roles is most likely to have a drama-free season!

Here are 11 important ways that youth baseball parents can support their child, team and coach... Click To Tweet

Volunteering is the first and most obvious way you can help your coach. It’s the most visible way you can contribute to the team.

Assistant Coach: Do you have experience as a baseball player or coach? If you have a desire to teach, this is a great option. But the motivation must be for you to help the entire team, not just your child.

This is something to consider for the experienced baseball parent. Instead of complaining on the sidelines, be part of the solution!

Scorekeeping: Your coach may need two or three scorekeepers. Some teams choose to have both a pencil and paper scorekeeper as well as a parent who manages the scoring virtually like with Gamechanger or iScore. Some teams may even need a parent keeping track of innings or pitches.

I’m going to experiment with a defensive scorekeeper this season — that’s going to require yet another volunteer!

Fundraising: Travel baseball is expensive. Most teams have some sort of fundraising or process to recruit sponsors to help with the costs.

Of course, doing these things well requires some skill. A good fundraiser is an organizer and networker. If that’s you, let your coach know!

Team Parent: Maybe the most important role. Your coach needs someone who is a liaison between the parents and coach. This person is the buffer for complaints and helps with communication.

Additionally, a team parent is often the one who collects paperwork and makes sure everyone is paid up and eligible. These are responsibilities that, if taken on by the head coach, can add significant stress and distraction.

I know that home cooked meals are a challenge during baseball season. However, it doesn’t need to be a gourmet meal. Your child needs fruits, vegetables, protein and water to supply the energy needed to get through a day of games.

Please, no fries. No soda. No candy.

Timeliness is important, too. A meal shouldn’t be consumed on the way to the game. Have something ready in between games, too!

Traveling is one of the fun experiences of tournament ball. However, it’s easy to fall into the trap of staying up too late prior to morning games.

Your coach has plenty to worry about. He doesn’t need to add tired kids to his list of concerns.

Understand the schedule, and establish a reasonable curfew for your child even if your coach does not.

It’s not expected that you’ll make every practice. And exceptions can even be made for missing the occasional game. But please… Please be dependable.

In fact, you can relieve a lot of coaching stress by not only arriving on time, but by getting there 10 or 15 minutes early.

Of course, you may have conflicts. But when you know of these conflicts, you need to tell your coach ahead of time so that he knows — and remind him a week and a few days ahead of time!

5. Stay Away From the Dugout!

This is a pet peeve of mine, and I think I speak for most coaches. When the game begins, let your child be.

I know this is tough. It’s tough for me, too, when I’m attending my kids’ games as a spectator. And I’ll admit that I occasionally violate this rule.

But this can be a major problem. You think you are helping, but it often isn’t the case.

Your child just made an error in the field. Or he did something wrong that you think needs to be corrected. Resist the urge and stay away.

Ultimately, your coach or his assistants are the ones who need to talk to your child during the game. They may have already, and you didn’t see it. But your involvement often makes things worse.

Your child wants to please you. Your presence at the dugout only reinforces that they messed up. This often leads to tears and more emotion than was there prior to you being at the dugout.

Additionally, your advice may not be consistent with what the coach is telling your child. So while you think you know the perfect thing to say in that situation, your encouragement may just cause more confusion.

Understand the coach’s philosophy. Know the approach and strategies that he teaches. And support that approach.

Let’s say that your son swung at the first pitch late in a game when he was given the take sign. Support your coach by explaining that approach and why your child should follow it. Don’t completely oppose your coach by saying that he was right to swing in that situation.

You need to be an extension of your coach. Even in cases where you disagree, it’s important that the kids buy into the system. Conflicting messages only makes things more difficult.

When the team is struggling, remain positive. Cheer louder. Encourage the players. Remain positive about the team when talking to your child.

Just as importantly, remain positive when your child is struggling. Don’t yell at them during a game after they make a mistake. Talk constructively with them about their struggles after the game.

These kids will be kids. They can be delicate emotionally. Your coach needs you to remain positive to keep them positive since the mental side of the game is so important.

8. Support ALL OF THE PLAYERS

It’s exciting when your child makes a big play. It always means a little bit more when it’s your child who is in the spotlight. But there are 10 other kids out there. Cheer them on!

This is where it becomes a baseball family. Don’t be on an island, only supporting your own child. And if players other than your child make mistakes, encourage them, too.

Treat these kids the way you want the other parents treating your own.

You may get frustrated with other players on the team. Avoid talking negatively about them in front of your child as they are bound to take that with them.

I don’t want to be a martyr here, but being a coach is hard. It’s stressful. It’s rare that everyone is happy. We don’t get paid. We lose sleep and our health can suffer.

Appreciate the sacrifices your coach makes!

Oftentimes parents will get together to get the coach or coaches a gift at the end of the season. That’s awesome and appreciated. But keep them in mind during the season, too.

No, that doesn’t mean you need to keep giving them gifts. Just appreciate all that they are going through. Reflect that in the way you talk to and about your coach.

It’s funny. When a team is playing well, everything is right with the world. But as soon as things start going downhill for a youth baseball team, watch out!

Don’t be part of this madness. It’s not helping. And really, it’s this drama that creates the cracks that inevitably lead to a team imploding.

You won’t always agree with your coach. But when that happens, know how to handle it.

Don’t yell at a coach during a game. Don’t walk through the dugout and onto the field to ask why your son is on the bench. Don’t send a series of long emails at midnight after a game.

Yes, you might imagine that I’ve experienced all of these things. But my experiences are not unique. As great as the families have been during my years of coaching, these things happen to all coaches.

Don’t ever talk to a coach during a game about your child’s playing time. Seriously. Please, avoid this at all costs. You won’t get what you want, and in fact you may just get the opposite.

When emotions are high, emails are also a bad idea. It’s far too easy for tone and intentions to be miscommunicated. Emotional emails almost always make things worse.

Follow a 24-hour cool-down period. If you’re upset, don’t talk to the coach after the game. Think about it for the next 24 hours. You may even realize that whatever was bothering you isn’t a big deal after all.

If you still need to talk, set up a time to chat face-to-face with the coach. Do so calmly. Don’t be combative or confrontational. Again, understand the complexities that go with coaching and trying to keep everyone happy.

Anything else you’d add to this list, or any experiences you want to share? Let me know in the comments below!