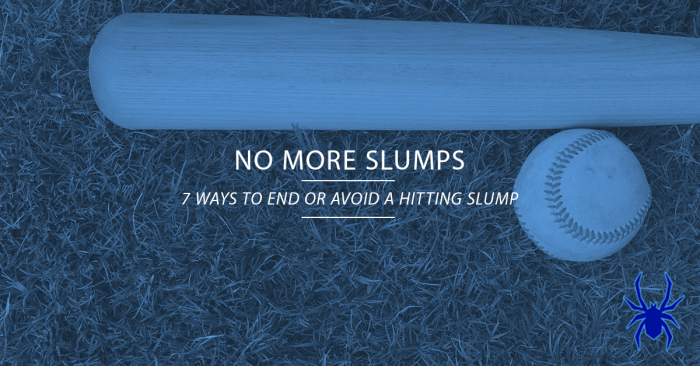 Every player, sooner or later, will run into a long hitting slump. It happens to youth players as well as Hall of Fame professionals. In fact, we know players can expect to run into multiple slumps throughout their careers — if not a single season!

Some of this is due to luck. Much of it comes down to remaining positive and continuing to utilize a good approach. But slumps happen due to things both within and outside of the player’s control.

There are several things that a young player can do to limit, end or avoid extended hitting slumps. Let’s take a closer look…

There are 7 main things a young baseball player can do to limit, end or avoid hitting slumps... Click To Tweet

Young players can get down on themselves quickly if they focus too much on stats — particularly in small sample sizes. We often praise a player for going 4-for-4, so it’s only natural that a player will feel like he let his team down if he went 0-for-4.

A bad process can lead to good results in small sample sizes. Similarly, a good process will sometimes lead to bad results over a span of a game or a few games.

It’s important to reinforce this — to not pay too much attention to short term results, particularly when they are bad. If the process is good, remind the player of this and praise them for the effort.

Something I like to tell my players after a hard hit out: If you’re mad and emotional about this result, what do you do when a bloop hit falls in? Do you tell the umpire it should be an out?

Ultimately, it all evens out. Good process will lead to more sustained good results over a long season.

2. Worry About What’s Within Your Control

A player who has a good process, is getting bad results and then gets down on himself for these bad results can lead himself into a deeper slump — bringing on bad process and more bad results.

During this time, it’s important that we help young players focus only on what remains within their control. Know the situation. Swing at good pitches. Remain positive.

If the other team made a good play, respect and acknowledge it. If the umpire made a bad call, brush it off and realize you did what you could.

3. Hustle at All Times

One of the best ways to avoid prolonged slumps is by hustling at all times. This needs to be a priority.

Unfortunately, slumping players often do the opposite. They immediately drop their head when they’ve hit another pop-up or a ground ball to the right side of the infield. Their luck has been bad, and they just assume it’s going to continue.

A slumping player will often respond in one of two counterproductive ways:

A slumping player will suddenly think they are better off walking. Their confidence is low, and they’ll take pitches they normally wouldn’t. This only prolongs the slump. They need to hit out of it, but only by continuing to swing at strikes.

A slumping player may also get anxious at the plate. In their attempt to hit out of it, they’ll begin swinging at pitches they normally wouldn’t. Again, this only makes it worse. They’ll miss more pitches, and when they do put the ball in play it will result in frequent poor contact.

Regardless of whether a batter is on a hot streak or in a slump, they must continue to be selectively aggressive. They should attack anything they can handle within the strike zone and avoid swinging at anything outside of it.

5. Watch Video of At Bats

Sometimes, a slump isn’t due to bad luck. Sometimes it’s because the player has a mechanical flaw in his swing.

Be aware of trends like consistently popping up, hitting soft grounders, pulling the ball too often or hitting everything softly to the opposite field.

Reinforce good habits! If something needs to be fixed, correct it with reps using the proper approach.

If everything is fine mechanically, reps still help. Whether it’s soft toss, tee work, live pitching or batting practice, get plenty of reps to improve muscle memory and confidence.

The single biggest reason a player will fall into a prolonged slump is a drop in confidence. Do all you can to prevent this!

Remind the player that his frame of mind impacts his performance. That a lack of confidence will almost always lead to poor results. And that confidence can change everything.

Remind him that he’s a good hitter, that this is something that every great hitter goes through. That the process is good, but process doesn’t always lead to results. By staying positive and continuing to take a good approach, things will turn around!

Be conscious of a slumping player who is losing confidence. As a coach or parent, provide some additional attention and support to that player to help keep them thinking positively.

Anything else you’d add to this list? How else can a young player avoid long hitting slumps?