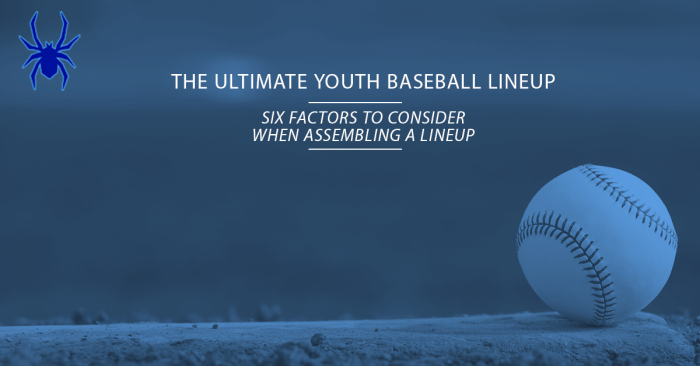 The game of baseball is littered with traditions. Some of those traditions apply to simple things like the structure of a lineup. We see this even at the youth level.

We expect it to work out something like this:

The truth is that this is an outdated approach — particularly for youth baseball.

While many models show that the order doesn’t make as much of an impact as you may think, the order that does tend to lead to the most runs usually looks nothing like this. Instead, it stacks your best hitters at the top of the order, giving them the most plate appearances.

You may not notice the difference in one game, but over the course of the season those extra plate appearances will lead to more runs and potentially more wins.

That said, it may not be as easy as simply batting your players in order of hitting ability. There are several other factors that you should consider.

Here are the six factors to consider when assembling the ultimate youth baseball lineup... Click To Tweet

Most lineup models that result in the most runs point to On Base Percentage being the most important factor. However, that’s likely true more for professional baseball than it is for the youth game.

On Base Percentage is absolutely important, don’t get me wrong. However, youth baseball typically sees more walks — and more kids who can find some success by being overly selective to the point that it appears they are looking for a walk.

If you construct an order based only on On Base Percentage, you’re bound to put a kid who rarely swings higher in the order than he should be. And ultimately, this approach would then only work against pitchers who don’t throw a ton of strikes. That hitter would hurt you against strike throwers.

Bottom line here is that the ability to get on base is a huge factor when assembling my lineup, but with a caveat. The player needs to do more than walk.

As I said above, a batter’s On Base Percentage can be a bad measuring stick in youth baseball since some kids who rarely swing can have reasonable success — but not against good pitching. That’s why Batting Average also needs to come into play.

A player’s batting average is going to be helped by speed and an ability to make solid contact. When fast youth players put the ball in play — particularly when they hit it hard — they will get on base at a high rate.

So when I’m crafting my lineup, it’s the kids who both hit and get on base frequently who are near the top; those who can’t are near the bottom.

I have no issues whatsoever with batting my most powerful hitter first. If he also gets on base frequently, gets hits, has good speed and makes good contact, it can be a huge benefit having such a hitter get the most plate appearances all season.

Now, the counter argument is that this player will then lose RBI opportunities. However, he will also be giving the players behind him greater RBI potential by getting more plate appearances and getting on base more often.

Additionally, the “bad” hitters in youth baseball still tend to get on base at a pretty good rate. So unlike in the pro game, the leadoff hitter in youth baseball is still likely to come up with runners on base.

While imperfect, OPS (On Base Percentage + Slugging) may be the best measure for overall hitting ability. Not only does this person get on base and hit the ball, they frequently hit for extra bases.

OPS is a good separator when determining which of two similar players hits first.

I’m actually not anti-strikeout overall. In pro ball, those who strikeout the most are often those who bring the most reward — or at least the best hitters are rarely those who almost never strikeout. But that’s not typically the case in youth baseball.

In youth baseball, striking out a lot tends to be a sign of being overmatched. Similar to how some batters will succeed via the walk against weaker competition, a high strikeout total from a player with good stats otherwise is a sign that a batter may hit well against the weak competition but not against the better pitchers.

Batters who rarely strikeout are dependable — you know that they can put the bat on the ball, regardless of the opposition. As a result, I tend to favor them at the top of the order.

Most models when determining ideal batting order for the pro game ignore speed. However, it’s so important to the youth game that it needs to be part of this discussion.

No, I’m not saying your fastest kid needs to bat first or second. Your fastest player may not be a good hitter, so it would be bad to give such a player extra plate appearances. Instead, it’s a bonus if your best hitters are also fast.

Unfortunately, I’ve seen this far too often. A kid is fast, so the coach thinks he’s the “ideal” leadoff hitter. In reality, the only thing that is ideal is his speed. But if he can’t get on base to begin with, he’s not a good leadoff hitter.

Beyond leadoff, though, speed and baserunning ability are things to consider when ordering similar players throughout the lineup. Let’s consider three batters with equal hitting ability, but different baserunning skills.

It would make no sense to put these players in this order. If Player A and Player B are as likely to get on base as Player C, that also means that they will often be on second base when Player C is on first. This plugs up the bases for your fastest player, making him one dimensional.

When you have players of similar hitting ability, I always try to bat the fastest one first — particularly if there’s a big difference. That allows the fast player to be the weapon that he is.

Speed from players who get on frequently leads to runs, particularly in the youth game. Passed balls, wild pitches, stolen bases, aggressive running and taking extra bases at a higher rate. A lack of speed often results in stranded runners and frustration.

The last thing you want is limiting your speed by having a slower runner preventing your fast runner from taking those extra bases.

What other factors do you consider when assembling the ultimate lineup?