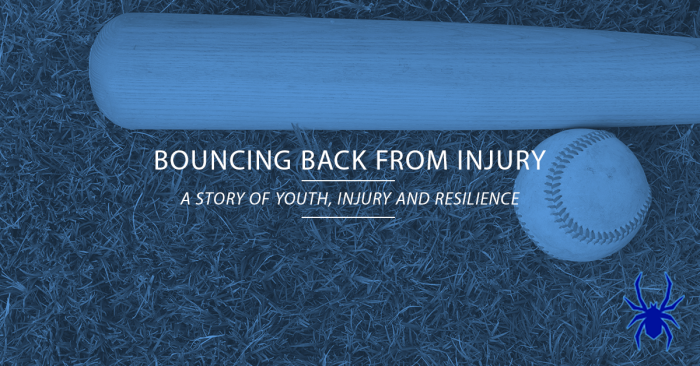 Not only was it St. Patrick’s Day, but it was a bigger holiday in our home: Baseball Assessments Day.

My oldest son had moved up to the 11-12 division, and my middle son Ryan was ready to take his place on the 9-10 year-old team. While he was only eight, he was more than ready to play with the big boys.

To celebrate the day, Ryan wore his green tuxedo shirt to assessments. It wouldn’t be my first choice, but the kid has more style than I do, so who am I to question it? 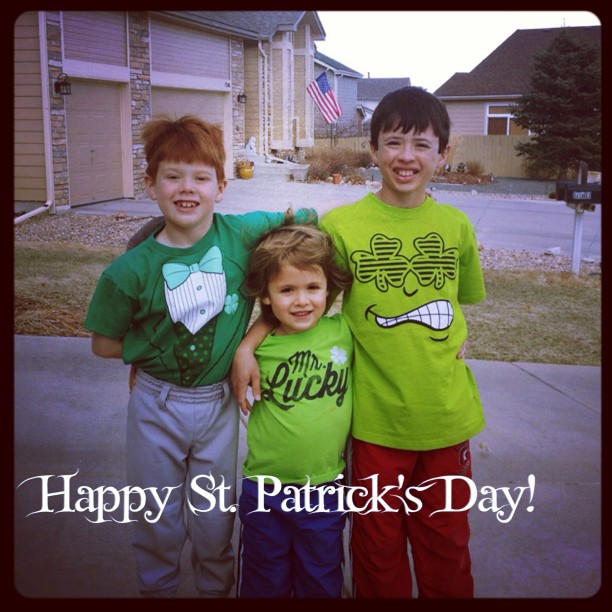 Since I was coaching, having him try out was simply a formality. He needed the number on his back, but I could have easily pulled him after it started.

None of us had any clue what was in store. What happened next could have easily changed the course of his young baseball future.

Assessments that day would consist of drills for baserunning, fielding fly balls, fielding ground balls, hitting, pitching and catching. I would keep one eye on Ryan, but my main focus would be to help build a good supporting cast for him to help us defend our championship.

For fly balls, a pitching machine was used to shoot baseballs out at a high speed into the air for the waiting eight, nine and 10-year-olds. They merely needed to catch the three balls and throw them back in.

Because of the conditions that day, the trajectory on those fly balls was lowered. These kids would now be receiving line drives that cut through the wind.

It sounds dangerous now, but I wasn’t all that concerned about Ryan. He was young, but I never felt like he was in a position where he wouldn’t be able to protect himself. Unfortunately, the unexpected happened.

I stood to the side with my clipboard, anxiously waiting for Ryan to field his three fly balls.

Fly ball sent. Ryan runs to track it. Glove up. Ball escapes over the glove. Ryan goes down.

I was no longer the coach. I sprinted out to Ryan, hoping it wasn’t as bad as it looked. He’s a tough kid, so when I saw him immediately go down and the tears started, I knew it probably wasn’t good.

Ryan was wearing sunglasses on this day, which may have been good or bad. The ball missed his glove and hit him over the eye. His sunglasses were pushed into his eyebrow, creating a huge gash.

Ryan was gushing blood. Other coaches, the president of the league and my wife were all attending to him now. We did our best to stop the bleeding. My wife scooped him up and we rushed him off to the car while parents and kids watched in stunned silence.

We sped Ryan to the emergency room. As we exited the car and ran him inside, I heard the seven words I feared:

Understand why this hurt me as his dad, and it wasn’t for selfish reasons. While I love baseball, it wasn’t from disappointment that he wouldn’t be able to fulfill some old man dreams of mine.

Ryan sincerely loved the game. He was great at it. And I feared this moment was going to take that joy away from him. 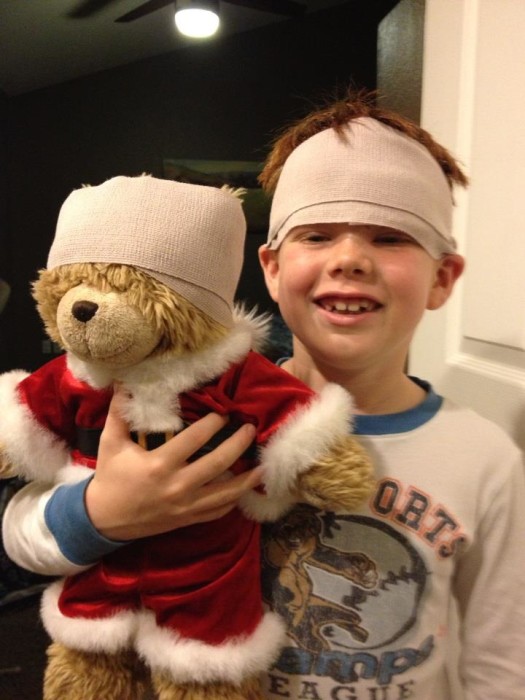 Looking at that picture of Ryan with his bear Patches just reminds me of how little he was at the time. Such an experience could easily scar him for the rest of his life.

We’ve all heard of professional baseball players who simply can’t recover after taking a baseball to the head. The fear at the plate or on the mound is too much to overcome.

My wife and I quickly put together a plan for how we were going to handle this to help Ryan recover emotionally — so that if he wanted to play baseball again, he could.

At this point, though, we didn’t know what to expect. If he decided he no longer wanted to play, I would have completely understood.

The knee jerk reaction would be to immediately assure Ryan that he’s going to be fine, and he can still play baseball. Tell him to be tough and all of that nonsense.

But we knew he was fragile at this point. I was also nervous that mentioning baseball at this sensitive time would just make it worse.

For the first night, we initially avoided the topic entirely. We didn’t talk about him playing again.

What’s funny is that it wasn’t long — I believe it was that evening — that he wanted to watch a baseball movie. While he was clearly returning emotionally to thinking about the game positively again, we weren’t going to push it.

Step 2: Talk Through What Happened

Next, it’s time to talk through with him what happened and what he thinks about it all.

My approach was to have him talk as much as possible to sort through his feelings. I also wanted to be sure it was clear to him that it’s normal if he was at all nervous about playing again. That we’ll take his return slowly.

I asked him about what he said — that he didn’t want to play baseball again — and how he felt about that now. He assured me he wanted to keep playing baseball, so we put a plan in place to get him there.

He’s beginning to recover both mentally and physically, but it’s not time to start throwing baseballs at him. He’s still in his pajamas, lounging inside all day for now.

Looking like he was ready, I suggested Ryan get out a rubber ball and start tossing it against the wall. 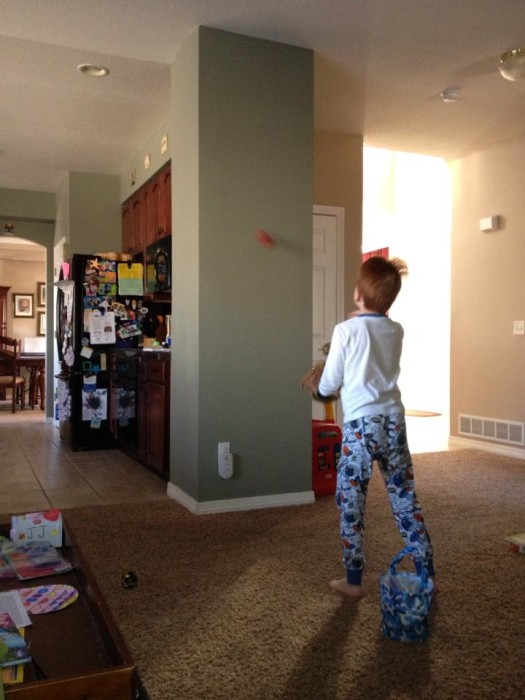 This got Ryan to start thinking about throwing and catching again without putting him at any risk. And it took very little encouragement!

Step 4: Outside with a Tennis Ball

The next day, it was time to start doing some baseball-like activities, but with a tennis ball. So we went out into the front yard and I first threw some easy grounders to him. Eventually, we moved to playing catch.

This helped him rebuild any confidence that may have been lost after the accident. This ball won’t hurt, so any fear would be limited.

Step 5: Light Work with a Baseball

The next day, it was clear he was ready to take it up another level. We brought back the baseball — the thing that created that gash above his eye.

Similarly to the tennis ball, we started with easy grounders and moved up to soft throws back and forth. The key was to slowly build his confidence while increasing difficulty at a cautious pace.

Now, I was probably more nervous about this than he was. I don’t trust my own accuracy — particularly in this situation — so I borrowed a helmet that has a protective mask to shield his face.

Pitch after pitch. I threw and he hit.

Ryan surprised me. Within a week, he was ready to return — no fear, just the same passion and excitement he had for it before.

But the key here is not to rush it. Build his confidence slowly, but there’s no reason to move him faster than is necessary.

Luckily for us, the weather got worse during the following week, so Ryan was given some extra time before our first practice. But he was fully ready, and there were absolutely no mental side effects of the injury.

Move at Your Child’s Pace

Given the injury, Ryan recovered much more easily than I expected. But the keys were that he had a desire to keep playing and we were going to support him at whatever pace he wanted.

Take it slowly. Only do things when your child is ready to do them without fear.

Possibly the worst thing you could do here is push him back into game action too quickly. Another episode could just result in him quitting for good.

Has your child ever experienced a major sports injury that required mental recovery? How did you handle it?