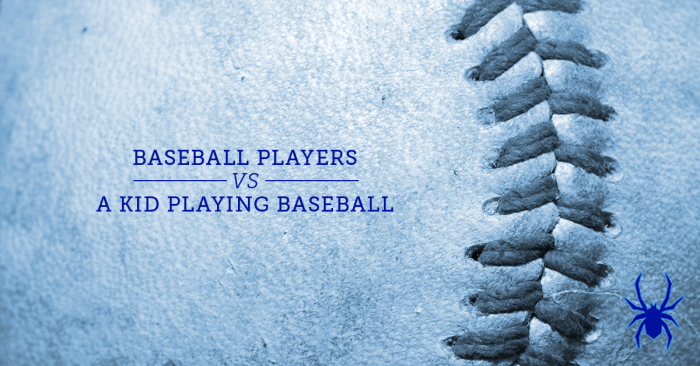 One of the greatest challenges youth baseball coaches face is navigating the emotions of these kids playing baseball. Some of those emotions help make baseball so much fun at this level.

That’s a tournament winning hit, and the result is pure joy all around.

But the flip side is that kids can have difficulty handling adversity. They cry. They pout. They stomp their feet. They grab their head. They blame the umpire or anyone other than themselves.

It’s very common for kids to handle adversity in emotional ways. It distracts them from understanding what actually happened, and it can impede progress.

As coaches, we first must acknowledge that this is natural. It’s something that I am still working on. But these are kids playing baseball, after all.

Once we acknowledge the problem, we should also help the player understand what is happening. They need to know that while an emotional reaction is natural, they should channel it constructively.

This example may be the easiest way to get through to emotional players. While it’s easy to focus on themselves, their reaction can positively or negatively impact their teammates. And when they channel that adversity into a positive reaction, it’s awesome seeing them realize the positive impact they can make.

This is the best way I’ve found to simplify for kids the importance of how you react to adversity.

A kid playing baseball is only worried about what just happened. They are angry. They are embarrassed. They are sad. And they hate that it happened to them.

But a kid playing baseball doesn’t learn from adversity. They just know that it’s an unpleasant situation.

Additionally, they know the importance of their outward reaction on their teammates. They want to be sure that their teammates see this as no big deal. “It’s okay, we’ve still got this. Let’s move on!”

In both cases, the player experiences emotion. But in one, that emotion clouds the player’s mind and prevents them from learning from the experience. In the other, the player accepts responsibility and reflects on what they can do to improve themselves.

Go down a long list of examples where kids can take two paths with emotion. We can go on for days. But here’s one…

The kid in question has two strikes. The pitcher fools him with an offspeed pitch. His immediate reaction is that it’s inside, but he was in no position to hit it because he was fooled. The umpire called it a strike.

This type of situation tends to be most emotional for kids playing baseball. They have lost control. Someone else determined their fate, and they are mad at the umpire, blaming him for the call.

But a baseball player looks at the situation with more maturity…

A baseball player will give the pitcher credit for fooling him and making a good pitch.

A baseball player will be looking for the offspeed pitch next time.

A baseball player understands that the umpire will likely call the same pitch a strike next time. So if he gets it again, he will be prepared to swing at it.

An exercise that I recommend coaches use with players is Reset, Reflect, and Refocus.

RESET: Acknowledge that something didn’t happen the way you wanted it.

REFLECT: What just happened? What can be learned from it?

REFOCUS: Move on to what’s happening now. What’s the situation?

It gives kids a process to use instead of being stuck in a helpless emotional state.

What examples do you have of how emotion can be channeled positively?